Our Changing World for Thursday 26 April 2012

Some of the characters in the computer game SPARX

Depression affects at least a fifth of young people by the age of 18, but many of those teenagers don't receive treatment. To combat this, a team - lead by University of Auckland psychiatrist Sally Merry - developed the computer game SPARX, which stands for Smart Positive Active Realistic X-factor thoughts.

Using techniques from cognitive behavioural therapy, SPARX is an interactive 3D fantasy game which takes players on a journey through seven different levels. Participants learn behaviours that are known to protect against depression over a four to seven week period.

The results of a study if 187 adolescents aged between 12 and 19 has been published in the British Medical Journal. The study found that SPARX was as effective as face-to-face treatment in reducing symptoms of depression and anxiety by at least a third.

Ruth Beran is shown how to play the game with Sally Merry and postdoctoral fellow Karolina Stasiak. Game developer Maru Nihoniho from Metia Interactive also explains how she created the interface for SPARX.

The Brain and Fertility

The University of Otago’s highest research honour, the Distinguished Research Medal, was recently presented to neuroendocrinologist Allan Herbison, for his work into the brain’s master control of ovulation and other aspects of reproduction. Professor Herbison, who is in the Department of Physiology, uses transgenic mouse models to understand the properties and functioning of the gonadotrophin-releasing hormone (GnRH) neurons, and the kisspeptin molecule, which together are responsible for the initiation of puberty and the maintenance of fertility.

Alison Ballance catches up with Allan Herbison, who’s in the Centre for Neuroendocrinology

Last week, the New Zealand Association of Scientists held a conference to discuss the growing concerns about the future of early-career scientists in New Zealand. The meeting was partly prompted by an open letter, written by University of Canterbury ecologist Melanie Massaro last year, in which she highlighted the lack of post-doctoral opportunities in science. More than 500 scientists signed the letter and joined the call for action over the lack of funding for post-doctoral fellowships and the mismatch between the needs of emerging scientists and the design of the Rutherford Discovery Fellowships. In his opening address at the conference, NZAS president Shaun Hendy recalled how he returned to New Zealand with the help of a Science and Technology Post-doctoral Fellowship, which has seen been disestablished. Acknowledging the gap between the number of postgraduate science students New Zealand produces each year and the number of post-doctoral positions, he said "the key to future economic growth lies in the skills and abilities of the current and future cohorts of emerging scientists ... Whether their futures lie in industry, academia, or the Crown Research Institutes, we must ensure that emerging scientists have the opportunities and resources to establish their careers."

Just a few days before the conference, the Government announced the results of its review of the Rutherford Discovery Fellowships and the chief science advisor at the Ministry of Science and Innovation, Prue Williams, outlined the main changes at the NZAS conference.

Manurewa’s Botanic Gardens was home to this year’s BioBlitz in Auckland. Conceived as a twenty-four hour survey, BioBlitz 2012 was run by Landcare Research and brought together scientists, students and the public to record all the biodiversity within a set urban area. They’ve been held in Auckland, Wellington and Christchurch over the last eight years, and the Royal Forest and Bird Protection Society recently held a weekend-long Bioblitz on the Denniston Plateau. At the 2012 Basecamp in the Gardens a large tent housed various displays 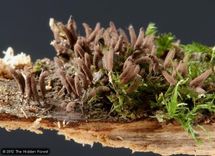 celebrating New Zealand’s biodiversity, and a popular one was a large collection of slime moulds. Justin Gregory went along to find out about these unheralded members of our natural environment, and began by chatting to the man behind the blitz, Peter Buchanan from Landcare Research.

He also spoke with electrician and slime mould enthusiast Clive Shirley, who has a web site called the Hidden Forest, which contains close-up photographs of many small secretive forest plants, including slime moulds.