Our Changing World for Thursday 12 April 2012

On the left, an adult female Argosarchus horridus is the largest stick insect species found in New Zealand; and at right, Landcare research biologist Alice Dennis with an adult female from the genus Acanthoxyla.

Stick insects are ubiquitous in New Zealand and can even be common in gardens, but because they are night-active and well camouflaged, they can be hard to find. Known as phantoms of the forest or walking sticks, they honour their name and look like twigs or leaves, swaying like foliage in the wind. There are more than 20 described species in New Zealand, but that number is likely to go up as taxonomists continue to identify and describe new species. All stick insects are vegetarian, feeding on a range of native and introduced plants. Given the lack of visual clues, stick insects attract and search for mates by smell. After mating, the female simply drops the fertilised eggs to the ground, where tiny nymphs hatch among the leaf litter. Many species found in New Zealand can also reproduce asexually in a process called parthenogenesis, in which the female produces only daughters.

In the centre image, a mating pair from the genus Micrarchus is well camouflaged among the twigs; at left and right, this female Argosarchus horridus was collected near Borland in Southland. All images courtesy of Alice Dennis.

Stick insects belong to the insect order Phasmatodea (from the Greek ‘phasm’ which means phantom) and are found throughout the world, with most diversity in the tropics. They arrived in New Zealand from the tropics and, once established, spread into some of the coldest areas, including subalpine regions. Scientists at Landcare Research – Manaaki Whenua study many aspects of stick insect biology, including distribution, genomics and population genetics. In this interview, Brent Sinclair, a physiologist specialising in cold adaptation in insects at the University of Western Ontario, and Landcare Research biologist Alice Dennis discuss how tropical stick insect may have adapted to the much colder climate in New Zealand. The Phasmatodea Collection at Landcare Research is part of the New Zealand Arthropod Collection and contains about 2000 specimens. Breeding cultures of some New Zealand stick insect species have also been established to study their natural history and to perform breeding experiments.

The good guys and the bad guys - Pete McMurtrie celebrates another successful stoat kill (left), while Fiordland skinks (right) are thriving now that the Resolution Island stoat population has been reduced to neglible levels (Images: A. Ballance)

The Fiordland Islands Restoration Programme is an ambitious effort by the Department of Conservation to remove introduced animals and restore native biodiversity on some of the hundreds of islands in Fiordland National Park. The programme began in 1988 with the eradication of rats from Breaksea Island, and more recently has been removing deer and stoats from the two largest islands in Fiordland, Secretary and Resolution islands. Resolution Island became the world’s first designated island sanctuary in 1891, and is New Zealand’s seventh largest island, just a bit smaller than Great Barrier Island. In the late 1800s conservationist Richard Henry moved hundreds of kakapo and kiwi from the mainland to the safety of Resolution Island – this pioneering island translocation effort, however, was doomed when predatory introduced stoats reached the island in 1900. In this Our Changing World special feature Alison Ballance joins an 8-day Department of Conservation stoat-trapping trip to remote Dusky Sound, on board the boat Southern Winds, to find out how effective 2315 traps are at eliminating stoats on a rugged forest-covered island that is nearly 21,000 hectares in size. 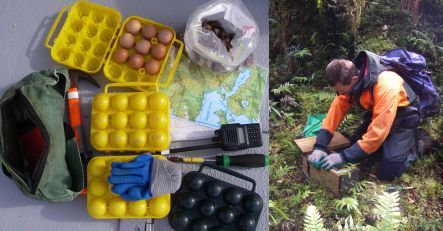 It takes an egg to catch a stoat - three times a year more than 1150 eggs and 2315 pieces of salted meat are placed in kill traps around Resolution Island (images: A. Ballance)

DNA and genetic analysis are providing useful insights into whether stoats being caught during the trapping programme are resident on Secretary and Resolution islands, or whether they are new immigrants that have swum across from the adjacent mainland. University of Auckland PhD student Andrew Veale is carrying out the genetic analyses, and Alison Ballance catches up with him in a genetics lab at Landcare Research in Auckland to hear about his preliminary results.

The two faces of Fiordland weather - DoC rangers brave a storm on the back deck of the Southern Winds, and a view from the top of Resolution Island the following day (images: A. Ballance)