Our Changing World for Thursday 8 March 2012

Robert Poulin, Anja Studer and Colin MacLeod at low tide at their lower Portobello Bay study site, and various snails that are the host for the first stage of a trematode flatworm parasite (images: A. Ballance)

This week is Seaweek, and there are lots of marine-themed activities happening around the country. To mark the week we have our very own salty tale, set in lower Portobello Bay on the Otago Peninsula. This tidal harbour shore doesn’t look like much when do you drive past, but it’s an important field laboratory for a University of Otago team interested in the role of parasites in coastal ecosystems.

The Zoology Department’s Robert Poulin heads the Evolutionary and Ecological Parasitology Group, and he was awarded the 2011 Hutton Medal for excellence in animal sciences. On a wet windy day Alison Ballance joined Robert, PhD student Colin MacLeod and postdoctoral research fellow Anja Studer to find out more the trematode or flatworm parasites that first infect molluscs such as mud snails, then move onto cockles and amphipods, before finally moving onto bird hosts such as stilts.

A pile of rubble provides new habitat for pioneering native plants in Landcare Research's display at the Ellerslie International Flower Show in Hagley Park this week. At left, ecologist Colin Meurk takes a break in the sanctuary of the small park he designed to demonstrate how Christchurch's inner city could be rebuilt. (images: V Meduna)

Christchurch residents want a greener inner city, a view that is reflected in the city council’s draft central city plan. Street trees, rainwater and roof-top gardens and a network of neighbourhood parks are all among the proposed developments as the city rebuilds after last year’s earthquake.

Landcare Research ecologist Colin Meurk sees the recovery period as an opportunity to bring nature back into the urban landscape. His design for Landcare Research’s exhibit at the Ellerslie International Flower Show, which opened this week, is inspired by the concept of pocket parks, small inner-city sanctuaries for both wildlife and people. The miniature park features a shop with a roof-top garden and living walls, a wetland, rain gardens and overflow swales that filter water. In an ecological succession from lawns to forest trees, more than 150 indigenous plant species, many of which are endemic to the Canterbury region, are included in the display.

One of the big unanswered questions for climate scientists is what role clouds might play in mitigating the effects of global warming. Now, new research out of Auckland University may hint at a possible cooling mechanism at work. Professor Roger Davies and BSc Honours student Matthew Molloy analysed ten years’ worth of data from the NASA Terra satellite and found an overall trend of decreasing cloud height; essentially fewer clouds at greater heights. On average, cloud height in this period declined around the planet by 1 percent, or 30-40 metres, with most of the reduction occurring at very high altitudes. Lower cloud height should allow the planet to cool space more efficiently, and possibly slow down global warming. Professor Davies published his and Matthew’s research in the journal Geophysical Research Letters. Justin Gregory asked him if this research means we now know more about clouds and climate change.

A Green Roof with an Otago Native Plants Theme 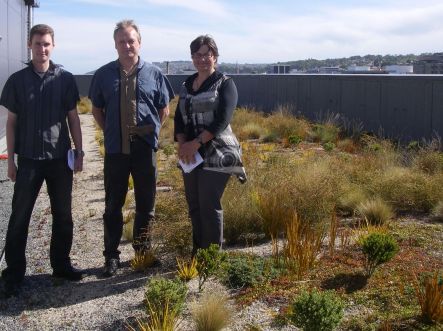 Mark Mason, Hans Pietsch and Janice Lord in the roof garden on top of the William James Building (image: A. Ballance)

When the University of Otago was constructing the William James Building, which houses the Psychology Department, they decided to build to Environmentally Sustainable Design principles. The result was a 5-Star Green Star building rating. Although a green roof was not a requirement, staff in the building were keen on the idea, so the Building Services team approached the Botany Department for help, and botanist Janice Lord rose to the challenge of choosing some suitable Otago native plants and developing a planting plan. To find out how the 2-year old garden is getting on Alison Ballance heads to the ‘secret rooftop garden’ in the company of Janice, the university’s Energy Manager Hans Pietsch, and Energy Coordinator Mark Mason. She finds that the garden is filtering and collecting a quarter of a million litres of water each year, which is used to flush the building’s toilets, and that it is an ideal research site for studying weed invasion.