Our Changing World for Thursday 23 February 2012 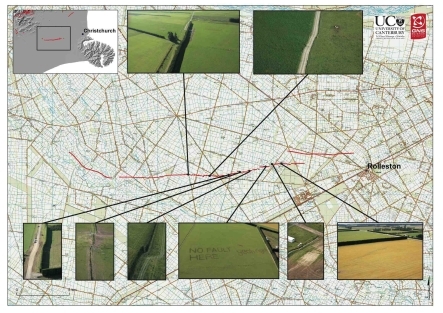 Within hours of the September 4, 2010, earthquake, Mark Quigley and his students began locating and mapping the new Greendale Fault. (Image: University of Canterbury and GNS Science)

Our thoughts are with the people of Canterbury this week as they mark the anniversary of the February earthquake. Mark Quigley, a senior lecturer in active tectonics and tectonic geomorphology at the University of Canterbury, became the go-to scientist in the wake of the September 4, 2010, earthquake and has continued to provide commentary for the public and the media in the aftermath of that and the devastating Februray 22 quake.

Together with colleagues from several institutions throughout New Zealand, he has prepared a white paper to answer some of the frequently asked questions about the Canterbury earthquake sequence. Last year, he received the NZ Association of Scientists' Science Communicator's Award and the Prime Minister's Science Media Communication Prize for his work on communicating the science of the Canterbury earthquakes. In this interview, he recalls his personal experience of the events.

Honey is having a comeback in mainstream medicine. Long used for a variety of ailments, the claim that manuka honey reduces microbial growth has been scientifically established now. Honey has also been used to inhibit scarring and infection in wounds, and may be effective in treating burns victims. The active ingredient responsible is called methylgloxal, and very high levels of it are naturally present in New Zealand manuka honey. But in its natural form, honey has limitations in effectiveness, delivery and usage, and it inevitably suffers by association with unproven natural remedies. Manuka Health New Zealand is trying to change all that by teaming up with scientists to make honey more user-friendly and more effective.

Last week, we introduced supergiant amphipods that had been discovered deep in the Kermadec Trench. The same expedition, led jointly by the University of Aberdeen's Oceanlab research facility and the National Institute of Water & Atmospheric Research, also returned with a catch of deep-sea snailfish - last caught more than half a century ago by the second Danish Galathea expedition. That expedition caught five specimens in a trawl but only two could be preserved.

Using especially designed ultra-deep submergence technology, the team deployed a camera system and a large trap to depths ranging from 6900 to 9900 metres, and caught seven specimens of the pale fish. Aboard NIWA's research vessel Kaharoa was Te Papa's fish collection manager Andrew Stewart, who says that at depths of around 7000 metres, snailfish were the only fish present. He has since identified them as the same species as those caught during the Galathea voyage, but genetic analysis is still ongoing and will complete the taxonomic identification process. 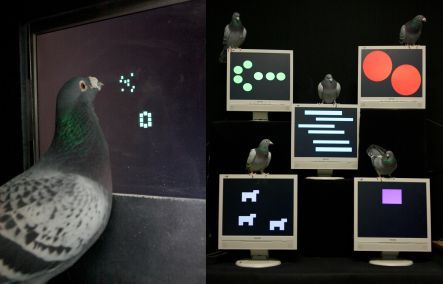 A pigeon uses a touch screen to identify which symbol contains the highest number of shapes (left), and some of the various ways different numerical values were represented to the pigeons (images: William van der Vliet)

Damian Scarf’s PhD research into the abstract numerical ability of pigeons earned him a recent paper in the journal Science. The work, which built on research published in 1998 using monkeys as an experimental subject, investigated the ability of three pigeons to rank three numbers from lowest to highest, and then apply the same reasoning when presented with two new numbers that were larger than anything they had seen before. Surprisingly, despite their much smaller brain, the pigeons performed this task as well as any primate yet tested. Alison Ballance chatted to Damian Scarf and his supervisor Mike Colombo from the Department of Psychology at the University of Otago about the experiment, the pigeons’ willingness to tap touch screens in return for wheat, and the length of time it took to train them.