Our Changing World for Thursday 24 November 2011

From left to right: Charles Unsworth; a high resolution multi-electrode array chip that can stimulate and record from patterned arrangements of cells; and human hNT astrocytes patterned on silicon chip to single cell resolution.

Brain cells, such as neurons and glial cells, grow in complex, interwoven arrangements, making it difficult to study the connections and signaling of individual cells in a neural circuit.

Charles Unsworth, and collaborators Euan Graham, Cather Simpson and Michelle Dickinson from the University of Auckland, and Alan Murray from The University of Edinburgh are trying to build single cell lattice networks of individual brain cells, linked to one another by their axons or dendrites, on silicon chips.

Techniques such as optical tweezers and laser ablation will be used to ensure the cells grow in regular arrangements, and these cells will then be stimulated and recorded using multi-electrode arrays. As a platform technology, the researchers hope to use these neural networks to studying processes such as memory, neurodegenerative disorders like Alzheimer’s disease, and the efficacy of drugs, at the single cell level.

The Department of Conservation runs five mainland islands – four in the North Island and one in the South island – where it aims to protect native species in different types of habitat through intensive management.

Te Urewera mainland island, in the northern section of Te Urewera National Park, is the biggest of the five mainland islands, and one of its outstanding features is that it contains the largest managed population of kokako in New Zealand.

Alison Ballance joins the Department of Conservation’s Greg Moorcroft (above. Image: A. Ballance) for a walk in the Otamatuna core area to hear about the history and successes of the project. 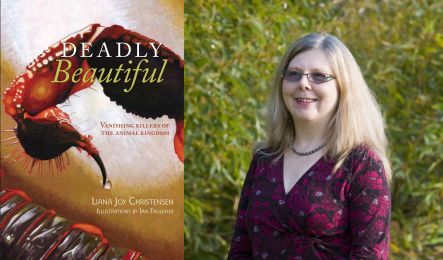 For every person bitten by a shark each year, 25 people are bitten by a New Yorker. That is just one of many statistics in Liana Joy Christensen's new book, Deadly Beautiful, that puts into context the risk of being attacked by an animal that we think of as dangerous. The Australian nature writer explores the fear and fascination potentially deadly creatures can arouse, and asks why their reputation often far exceeds the actual danger they pose. She begins her book with a chapter on snakes, possibly the most loathed in this group of dangerous wildlife, and quickly establishes that snakes are generally not the aggressors, nor the lethal killers, that many people perceive them as. As she moves through the animal kingdom, from spiders (including katipo) to sharks, bears to lions, she makes a compelling case for the protection of these dangerous, and often endangered, animals.

If you visit Zealandia eco-sanctuary in central Wellington on a sunny day, chances are you’ll see one of the resident tuatara basking in the warmth. The tuatara, which originally came from Takapourewa or Stephens Island in the Marlborough Sounds, have settled well in their new home, and are breeding. However, last year Zealandia staff discovered some freshly-laid tuatara eggs that had been unearthed from their nest, so they called on the tuatara experts at nearby Victoria University to help incubate the eggs. Now it’s time for the babies to go back home, and Alison Ballance joins technician Sue Keall and senior lecturer Nicky Nelson from the Allan Wilson Centre for Molecular Ecology and Evolution at Victoria University of Wellington as they pack up the little reptiles. At Zealandia she talks with education officer Brian, and Zealandia’s conservation manager Raewyn Empson. Neavin Broughton from Te Ati Awa and the Tenths Trust welcomes the babies back home, and Rosemary Hippolite, Celia Hippolite and Louisa Paul are there to represent Ngati Koata.

Follow this link to hear a previous Our Changing World story about a group of tuatara being released in Karori, and another group being prepared for relocation from Wellington Zoo (8 November 2007).