Our Changing World for Thursday 24 March 2011

Waikato University's electric fishing boat (left) stuns fish by passing a strong electric current through two octopus-like electrodes which are lowered into the water when in use. Red-finned perch found in the lower reservoir at Zealandia Sanctuary in Wellington (right) (images: A. Ballance)

Pest fish are a significant problem in many New Zealand's lakes and rivers, and one for which there is no easy solution. Nick Ling from the University of Waikato is investigating ways to effectively control pest fish, and Alison joins him and his team for an unusual night's fishing for European red-finned perch in the lower reservoir in the Zealandia sanctuary in central Wellington. Waikato University runs New Zealand's only electric fishing boat, and boat driver Warrick Powrie explains how the boat produces a large electric current which temporarily stuns fish.

Raewyn Empson from Zealandia reports that the recent rotenone operation to remove introduced brown trout from the upper reservoir went very well - about 450 brown trout were taken out, while 159 banded kokopu and 7 koura were caught and then safely returned once the poison had disappeared. Final proof that trout have been completely removed from the dam won't be known until more fishing is carried out next summer.

Our Changing World recently featured Nick Ling in a story about mudfish - listen to that story here. 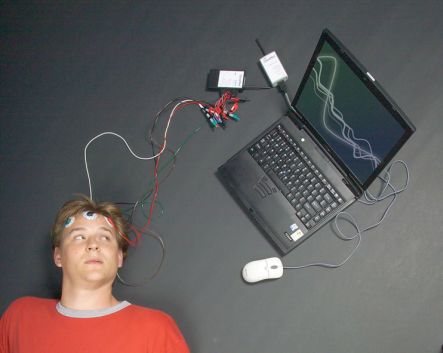 Wired for sleep: a student prepares to have an electroencephalogram or EEG (image: University of Waikato)

We sleep through about a third of our lives, yet we still don't know why we need that much sleep. Neither is it clear what happens in the brain as we drift off or cycle from quiet slow-wave sleep to rapid-eye-movement (REM) sleep. University of Waikato physicists Moira and Alistair Steyn-Ross, in collaboration with colleague Marcus Wilson, hope to answer some of these open questions by comparing natural sleep with a mathematical model they developed to describe the enforced sleep brought on by anaesthetic drugs.

The anaesthetic-induced changes in brain states from wakefulness to unconsciousness have similarities to general phase transitions in physics, such as water freezing to form ice. The team's goal is to improve our understanding of how the brain cycles through different sleep states and how sleep is linked to memory formation and learning. 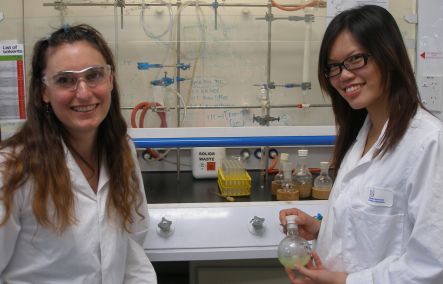 Adjuvants are compounds that stimulate the body's immune system to fight diseases such as viruses or cancers. They are an essential ingredient in vaccines, and with colleagues at the Malaghan Institute of Medical Research, Bridget Stocker and PhD student Janice Cheng are developing better adjuvants for personalised cancer vaccines.

Bridget Stocker heads the Immunoglycomics Research Group and is particularly interested in the role carbohydrates play in the immune response. The adjuvants being developed are glycolipids, and by synthesising a green fluorescent version of the glycolipid, it is hoped to better understand how they work and thereby develop better vaccines. Click here to listen to a previous Our Changing World story on the development of personalised cancer vaccines at the Malaghan Institute, and here for a story on sorting cells.

A fossil site at St Bathans in central Otago, which dates back to the Miocene, about 19-16 million years ago, is revolutionizing our understanding of New Zealand's biological and geological history. Having already brought us our first records of a terrestrial crocodile, an unknown taxa of small land mammal, flamingo, swiftlets and the oldest record of tuatara in New Zealand, the latest fossil revelation is of a terrestrial turtle. Although the St Bathans fossil site primarily contains freshwater fossils from the large lake that used to be present there, the authors of the paper "Terrestrial Turtle Fossils from New Zealand Refloat Moa's Ark", published last week in the journal Copeia (March 2011, Vol. 2011 No. 1, pp. 72-76), say the two fossil fragments most closely resemble extinct terrestrial turtles from the genus Meiolania, which once occurred in Australia, New Caledonia, Fiji and Lord Howe Island. Meiolania turtles had distinctive horns on their head, and a tail with a large club on the end. Alison Ballance talks about the fossils and their significance with Trevor Worthy from the University of New South Wales, Alan Tennyson from Te Papa Tongarewa, and Paul Scofield from the Canterbury Museum.