Our Changing World for Thursday 11 November 2010

Daniel Hutchinson and a couple of gels before and after swelling in copper (image: Mary Gray)

Could a substance that looks a little bit like hair-gel be used to create artificial muscle in life-like robots? PhD student Daniel Hutchinson from the University of Otago thinks so, and is working on creating polymer gel actuators in the laboratory.

A polymer gel consists of a criss-cross network of long polymer strands, with cavities between them. Like a sponge, these cavities allow the gel to absorb liquid, causing the gel to expand in size. When the liquid is removed, the gel shrinks back to its original size. A polymer gel actuator is created when an expanding and contracting gel is connected to a device which allows work to be done to, such as a piston. Using chemical reactions, Daniel Hutchinson can expand and contract the polymer gels he has created, with potential for these gel actuators to be applied as artificial muscles or as chemical sensors.

Kim Pickering at Waikato University works in the area of composite polymers, which includes products ranging from carbon fibre to corn starch. While most polymers (plastics) have traditionally been made from oil-based products, Kim Pickering is interested in renewable bio-derived composite products, that could include natural fibres such as hemp and harakeke embedded in the polymer to add strength.

What does it take to make a discovery? Should the credit go to the person who makes the first observation or who first makes sense of it all? The discoveries of oxygen, several planets and natural selection as a means of evolution are just some examples of the many priority disputes throughout the history of science. University of Otago science philosopher Alan Musgrave explores what it means to discover something, and whether it is a matter of seeing or understanding something for the first time.

Educated at the London School of Economics, Alan Musgrave completed his doctorate under the supervision of Sir Karl Popper, whom he acknowledges as his inspiration to focus on the philosophy of science. With Imre Lakatos, he edited Criticism and the Growth of Knowledge, which is seen as one of the most influential collections of essays on 20th-century science philosophy. In his latest book, Secular Sermons, published by University of Otago Press, he explores many basic assumptions in science, religion and mathematics.

Next month, he will discuss realism and surrealism about science.

Photodegradation and the Serendipity of Science 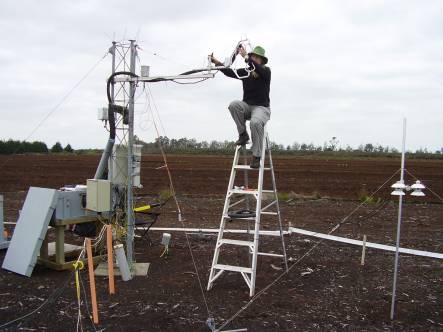 Continuing on with the theme of discovery, when Susanna Rutledge began her PhD research in the Earth Sciences Research Group at Waikato University on carbon dioxide production from bare soils, she was convinced that microbes would be the source of any CO2 emissions. Some puzzling results, months of checking and re-checking, and a chance encounter with a paper from another research field, led to the new realisation that photodegradation - the action of sunlight on soil - was a significant producer of CO2. Although other soil carbon studies have almost certainly recorded CO2 production by photodegradation, this was the first time that its significance has been realised.

Susanna Rutledge is now a Research Fellow, funded by the New Zealand Agricultural Greenhouse Gas Centre to investigate approaches for increasing or maintaining soil carbon content of pasture soils using eddy co-variance approaches coupled to other measures of carbon flux and turnover. Hear more about these techniques to study soil in an earlier interview with Louis Schipper and Dave Campbell from Waikato University.

Using a chamber system to measure carbon dioxide production from dry peat, in the field, left (image: Dave Campbell), and a mobile lab system for measuring small amounts of peat outside in the sun, right.