Our Changing World for Thursday 10 December 2009 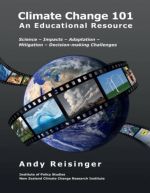 Andy Reisinger is a senior research fellow with the New Zealand Climate Change Research Institute at Victoria University. He played a key role in the 2007 Intergovernmental Panel on Climate Change, coordinating production of the Synthesis Report, which summarised the IPCC's most recent assessment of climate change. He has just produced a new book called 'Climate Change 101 - an educational resource' which is based on the 2007 IPCC reports, and aims to provide a clear explanation of the many complex issues surrounding climate change science, policy responses and possible mitigation efforts.

Climate Change Stories from the Our Changing World Archive

Our Changing World has featured a number of climate change-related stories in the past four years - follow the links to hear more. The list begins with the most recent stories.

8 October 2009 University of Auckland's Glenn McGregor talks about the impacts that climate change may have on heat waves and health.

2 July 2009 The ABC's Robyn Williams talks with Helen Amanda Fricker about lakes and rivers under Antarctic ice, and with Marco Tedesco about polar ice melt.

4 June 2009 NIWA scientists Philip Boyd and Cliff Law discuss adding iron to the ocean as a way of triggering algal blooms to sequester carbon in the deep ocean.

9 April 2009 Ecologist Terry Chapin's research has led from plant nutrients to the impact of global warming on Alaskan ecosystems. Also, local Arctic communities are suffering as sea ice melts, but it could prove a boon for mineral and oil exploration.

5 March 2009 Antarctic sea ice contributes to a global ocean current that transports heat around the planet and between the hemispheres. Most research on sea ice has been carried out in spring, when it begins to break up again, but now a team of scientists from the University of Otago, NIWA and Victoria University is focusing on the processes that take place just beneath the sea ice during winter.

20 November 2008 Marine botanist Catriona Hurd, at the University of Otago, and biogeochemist Cliff Law, at NIWA, discuss the impacts of ocean acidification on marine plants, from microscopic phytoplankton to larger seaweeds.

13 November 2008 Abby Smith from the University of Otago is one of an increasing number of marine scientists who are concerned that increasing global carbon dioxide levels are acidifying the world's oceans, and having a significant negative impact on creatures such as corals and bryozoas.

18 September 2008 Deutsche Welle's Irene Quaile investigates the role of Arctic permafrost soils as a source of methane in lakes.

5 June 2008 Rajendra Kumar Pachauri, chair of the Intergovernmental Panel on Climate Change shares his vision of a low-carbon world.

15 May 2008 Richard Alley, a geologist at Pennsylvania State University, discusses the future of the Antarctic ice sheets and how they may respond to climate change.

10 May 2007 Ralph Sims, the director of Massey University's Energy Research Centre and a convening author on energy for the Intergovernmental Panel on Climate Change, talks about mitigation opportunities at a conference in BangkokOptions for climate change mitigation

9 March 2006 Kevin Trenberth, NZ climate scientist working with the US National Centre for Atmospheric Research is convinced there is a link between the increasing frequency and intensity of hurricanes and global warming.

Massey University's Hugh Blair has been conducting trials over the last five years looking at the diet of pregnant ewes to see whether nutrition can impact on their lambs, not just when they are born, but later in life. Specifically looking at twins, the results so far indicate that lambs born to mothers of restricted diets produce more milk when they themselves become mothers, and that body fat of the lambs as they grow up can also be affected by their mother's diet.

Ruth Beran meets with Hugh Blair in Palmerston North to find out more, and he drives her to see some of the sheep in the trials.

When Massey University's wildlife vets at the New Zealand Wildlife Health Centre are not rushed off their feet looking after injured animals such as kiwi and albatrosses, they're busy trying to solve wildlife health mysteries. Wildlife vet Lisa Argilla is investigating unusual yellow-eyed penguin deaths over the last few years, and attempting to identify possible diseases and patterns of death.

Another wildlife vet, Janelle Ward, is researching disease that affects shore birds such as godwits when they are caught. Capture myopathy is a non-infectious disease that is characterized by damage to muscle tissues. It can also affect mammals such as deer.

Over the last few weeks Our Changing World has featured stories from the Leigh Marine Lab about noisy fish, and the loud dawn and dusk choruses that snapping shrimps and sea urchins make. We have also heard how lobster larvae might use the sound to find their way back to shore from the middle of the ocean.

PhD student Jenni Stanley is also part of the 'sounds of the sea' team, and she's interested in how crab larvae might make use of this marine racket to choose which neighbourhood to set up home in.