Our Changing World for Thursday 3 December 2009

Full of microscopic bacteria, algae, and protozoans, biofilm is the brownish-green slime that you get on the rocks and plants by the sides of waterways. They form a very important part of the food-web, playing key roles in primary production, water quality, cycling of nutrients, and removal of suspended solids. The also assist in energy flow to higher positions in the food chain (ie trophic levels).

University of Auckland researchers Gavin Lear (left) and Gillian Lewis (right) are studying biofilms to determine if the bacteria contained in them could be used as a standard biological indicator of stream health and function. They also believe that biofilms may provide a means to test Hubbell's neutral theory, which in contrast to Darwin's theory of evolution, suggests that natural selection based on the differences between individuals in an ecological community of tropically similar species is irrelevant to their success.

Professor Dorthe Dahl-Jensen heads the Centre for Ice and Climate, a centre of excellence at the Niels Bohr Institute, University of Copenhagen, Denmark. The Centre's main activity is drilling ice cores through the Greenland ice sheet, for example the NGRIP and NEEM drilling projects, and analysis of ice cores with the objective of understanding the governing processes of past and future climate.

Dorthe Dahl-Jensen will be delivering a keynote address at the COP15 Climate Change Conference in Copenhagen next week about how understanding past climates can help us better predict future climates. She talks with Alison about why it's important to know how a warming world will impact the Greenland ice cap, because if it melts completely it would cause a 7-metre sea level rise. 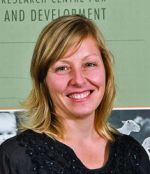 Deborah Sloboda from the University of Auckland's Liggins Institute, and acting head of the National Research Centre for Growth and Development, is looking at the impact of mother's diet before conception and during pregnancy and lactation on her daughter's growth, age when they reach puberty and their later reproductive capacity.

In conjuction with Mark Vickers, she has found that a pregnant rat's diet can lead to early pubertal onset in her pups, no matter what the pups ate after their birth. The mother's diet can also impact on the future weight of the pups.

While her recent research has been in an animal model, Deborah Sloboda has previously looked at a large study of young women in Western Australia, and has found some striking similarities. Her research may assist in explaining why girls are reaching puberty earlier in developed countries, and why obesity is on the rise.

In our ongoing ocean science series we are back at the University of Auckland's Leigh Marine Laboratory finding out more about bioacoustics. PhD student Shariman Ghazali is investigating what sounds different species of fish make, and when and why they make them. To date he has recorded sounds from john dory, red gurnard and big eyes, and he has been investigating the source of mysterious 'pops' that divers hear when they find crayfish in crevices.