Our Changing World for Thursday 18 June 2009

Operation Ark in the Eglinton Valley

Every few years New Zealand native beech trees have a spectacular mass seeding … what's called a 'mast' year. In the past, these mast years were good news for native animals and birds, as there was lots of food for them. Unfortunately these days the animals benefiting from the bonanza are introduced predators such as rats and stoats, and what's good for them is very bad news indeed for the natives. In 2001 and 2002, for example, there were two beech mast years in a row, and stoats and rats were present in plague proportions that nearly caused the extinction of orange-fronted parakeets, and dramatically reduced numbers of mohua, or yellowheads, whio or blue ducks and the two native bat species.

To prevent this happening again, the Department of Conservation chose ten key beech forest sites in the South Island to be the focus of Operation Ark, which kicked off in 2004. Operation Ark is an emergency response initiative, a variation on the mainland island concept that uses intensive pest control during mast seeding years in order to protect vulnerable populations of endangered species. In the first of a new series from Fiordland, Alison Ballance catches up with Department of Conservation staff involved in monitoring native animals, and monitoring and trapping introduced predators in the Eglinton Valley, along the Milford Road. 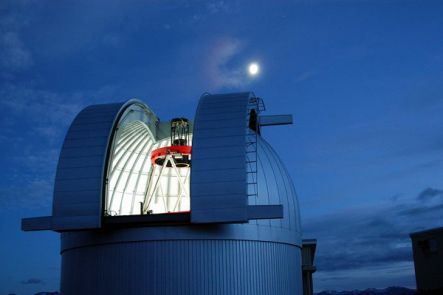 The 1.8m MOA telescope at the Mt John Observatory was installed in 2003 and began observing in 2004.

The first planet outside our own solar system was discovered in 1988, and in the two decades since then, more than 350 new extra-solar planets have been added to the list. The largest telescope at the Mt John Observatory near Lake Tekapo is used to search for stars that have planets orbiting around them, using a method called gravitational microlensing, which was first described by Albert Einstein. MOA (Microlensing Observations in Astrophysics) is a Japanese/New Zealand collaboration which also contributes to fundamental research on dark matter and stellar atmospheres.

This technique makes use of the magnifying effect of stars that line up behind each other. The front star acts as a lens for the more distant star, and if the front star has planets orbiting around it, they will cause wobbles in the magnifying effect. The advantage of this technique is that it is more sensitive to less massive and more earth-like planets in distant regions of the galaxy. 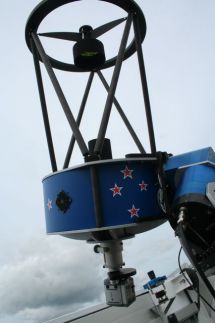 New Zealand astronomers now get a glimpse of the universe's earliest generations of stars using the BOOTES-3, a new gamma-ray telescope set up in a Marlborough vineyard. This is part of a joint Spanish-New Zealand astronomy project that already runs two such telescopes and needed a Southern Hemisphere site to complete its network.

The telescope scans the sky for gamma-ray bursts, the electromagnetic radiation created by the death of massive ancient stars. Such early stars are much too faint to see directly, but they can be detected when they die and detonate in a gigantic explosion, creating a new black hole.

Gamma-ray bursts are initially detected by special satellites that instantly notify earth-based telescopes of the position of the event in the sky. The new BOOTES-3 telescope, capable of responding within seconds, starts recording the optical light from the explosion and the data can then be used to determine the distance and the energy released.

The Otago Medical School had its beginnings in 1875. Since then, more than 10,000 medical students have passed through its doors. But it has become not only a place to train doctors, but a significant research organisation. Alison Ballance chats with historian Dorothy Page, and Don Roberton, Dean of the Faculty of Medicine at the University of Otago, about the history of research at the medical school, and the recent book 'Anatomy of a medical school - a history of medicine at the University of Otago 1875 - 2000', by Dorothy Page (Otago University Press 2008).