Our Changing World for Thursday 2 April 2009 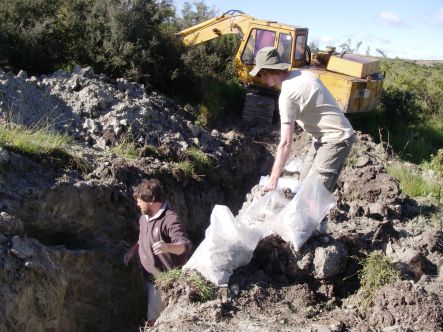 Paul Scofield (above left) and Alan Tennyson at the St Bathans fossil dig.

A fossil site at St Bathans in inland Otago is providing rich insights into the New Zealand fauna. It is rare to find fossil sites for the Tertiary period, which covers the last 65 million years, so the St Bathans' fauna, which dates back 16-19 million years is filling a big gap in both the New Zealand, and the international, fossil record. Work began at the site in 2001, and the most 'famous' find to date has been the first evidence that New Zealand was once home to land mammals other than bats. A recent paper on tuatara fossils from the site supports the idea that dry land was present during the Oligocene. The dig is a collaboration between Te Papa, Canterbury Museum, University of Adelaide and the University of New South Wales. 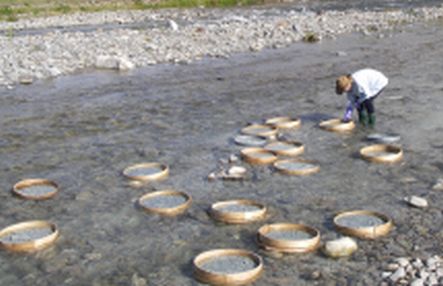 Sieving sediment in the nearby river (images: Alison Ballance). 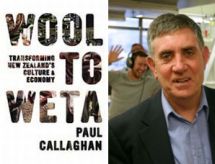 Paul Callaghan is the Alan MacDiarmid Professor of Physical Sciences at Victoria University. He is the former Director of the MacDiarmid Institute for Advanced Materials and Nanotechnology and has won many awards for his work in science and leadership. His new book 'Wool to Weta - transforming New Zealand's culture and economy', is published by Auckland University Press, and is the end product of a three year long investigation into the subject of sustainable wealth generation and culture change. It comes at the end of a series of public lectures around New Zealand called 'Beyond the Farm and the Theme Park'. In these lectures Paul argued that New Zealand's best future lies in high-tech knowledge-based industry. During the lecture series he interviewed a variety of prominent New Zealanders about their ideas and visions for the future, and the video footage was made into ten half hour programmes for Stratos TV. Videos of the lectures and interviews are available on the MacDiarmid Institute website.

South Island robins were once widespread through the South Island. Now, these little forest birds are pretty much confined to large areas of forest such as National Parks, although a small remnant population survives at the edge of Dunedin city. Here they make use of Douglas fir plantations, as well as native forest that is protected as water catchment. In an Otago University study Graham Parker is investigating the breeding success and recruitment of robins in the introduced conifers, to find out whether it is 'good' habitat, and he is also involved in the possible reintroduction of robins to a fenced sanctaury, Orokonui. 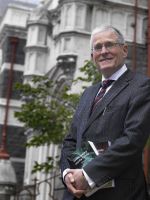 The Human Genome Research Project is a multi-disciplinary three-year project that analysed how and to what extent genetic tests should be regulated in New Zealand.

During the first year, the team, led by principal investigator Mark Hanaghan (right), looked into issues relating to pre-implantation genetic diagnosis. During the second year, the topics included newborn genetic screening, genetic testing of children, community genetics, and the role of public consulation in reproductive technologies. The third year focused on areas of patenting, pharmacogenetics, privacy and issues about the regulation of extracted DNA and the responsibility of researchers.

Three reports were published and are available online.