Our Changing World for Thursday 23 October 2008 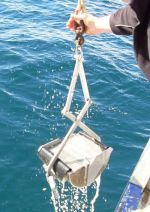 Deep Thought is a marine science course run for year 11 students by the New Zealand Marine Studies Centre, at Otago University. To learn about the realities of life as oceanographers, nine students took part in a cruise on the research boat Polaris. Working alongside marine scientists Daniel Leduc and Cerys Bailey, one group of students sampled benthic life on the seafloor, while the other group investigated ocean currents. Alison Ballance boarded the boat at Portobello for a day at sea with the budding marine biologists, and reports that she was not the only one to get seasick. To find out more about courses and events at the New Zealand Marine Studies Centre check out www.marine.ac.nz.

Above Right: The benthic grab holding a sample of seafloor sediment collected from 400 metres depth in the Saunders Canyon.

Above Left: Daniel Leduc guides the CTD sampler back on board the Polaris. 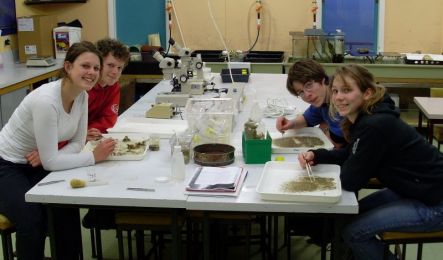 Studying the soils of Easter Island

In just a few centuries, the people of Easter Island wiped out their forest, drove their plants and animals to extinction, and saw their complex society spiral into chaos and cannibalism. Now, a New Zealand-led team of scientists is planning to use new techniques to solve the mystery of the population's sudden collapse. Environmental scientist Troy Baisden, at GNS Science, talks to Veronika Meduna about the team's plans to trace steroids in the soil column to test his hypothesis that Easter Islanders overshot the carrying capacity of their island's weathered volcanic soils.

Understanding the earliest moments of the universe may be a step closer thanks to the efforts of physicists working on ultra-cold matter. Experimental and theoretical physicists joined forces to study the formation of Bose-Einstein-Condensates - a state of matter that forms at temperatures close to absolute zero and in which atoms behave as a wave rather than individual particles. Veronika Meduna talks to Ashton Bradley and Crispin Gardiner, at the University of Otago's Jack Dodd Centre for Quantum Technology, about their discovery of spontaneous whirlpools in the condensate, and how that helps them understand what happened after the Big Bang.

"Biomass" is essentially a form of solar energy stored in green plants through the process of photosynthesis. Part of that process is carbon fixation where CO2 is chemically converted or fixed as carbon. The New Zealand forestry industry produces over 13 million tones of biomass a year in wood waste. Wood has a carbon content of about 50%, and whether it's left to rot or is burned, it releases carbon back into the atmosphere. Biochar is charcoal produced from biomass which can store carbon and is produced through a process called pyrolysis. It has an intensified carbon content of about 70-80%, which can be permanently sequestered in soil. 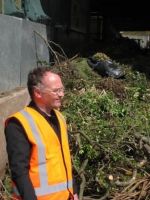 Amelia Nurse talks to Nick Gerritsen, (pictured right) director of CarbonScape, a Marlborough company making biochar out of wood waste using new microwave technology. Nick's a IP strategist, a business startup expert and a founding member and director of a range of companies including Celsias.com, Vortex DNA, and Aquaflow Bionomic Corporation. But first she talks to John Edwards from Massey University about the basics of pyrolysis.

Below: Biochar is charcoal produced from biomass which can store carbon and is produced through a process called pyrolysis. 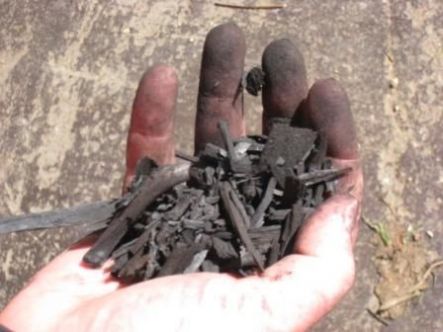