Our Changing World for Thursday 11 September 2008

The Wellington South Coast Marine Reserve Coalition was formed seventeen years ago and on Sunday they finally achieved their goal of establishing a marine reserve on Wellington's south coast. The Taputeranga Marine Reserve is an 854 hectare block that stretches from the old quarry to Houghton Bay. Amelia Nurse was at the opening at the start of Conservation Week and spoke with founding coalition member Colin Ryder and James Bell from Victoria University of Wellington's Centre for Marine Environmental and Economic Research about what this new reserve will mean for research and marine regeneration.

About to cut the "ribbon" 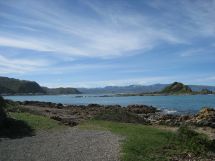 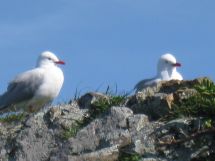 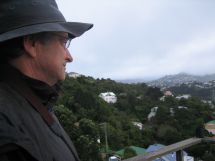 The theme of Conservation Week this year is Meet the Locals. Wellington residents are finding that the locals - in their own backyards - are changing year on year. Native bird numbers are on the rise in the capital city, and a number of species that haven't been seen for years are returning and settling in. Dacia Herbulock spoke to Stuart Nicholson (pictured on the left) of the Ornithological Society and Colin Miskelly of the Department of Conservation who have been watching the trend. They share their thoughts on what has made Wellington - uniquely among urban centres in New Zealand - attractive to returning native birds. 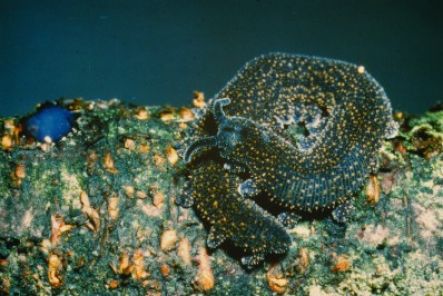 This species was described as Peripatoides novaezealandiae var. suteri, and initially found only in the Mt Taranaki region. However, it also occurs at Whakapapa, the Coromandel and Waitakere Ranges (Photo Landcare Research).

Velvet worms, or peripatus, are intriguing but little-known creatures of the New Zealand undergrowth. They come out at night, they walk on 13 to 16 pairs of stumpy legs and they spit glue to pin down their prey. They look a bit like caterpillars, but taxonomically speaking velvet worms sit somewhere between insects and worms. There are more than 30 species found in New Zealand and they all resemble their ancestors who lived about 550 million years ago - which makes peripatus more ancient than even the tuatara. Veronika Meduna talks to Dianne Gleeson, a scientist at Landcare Research, who spent months combing all parts of New Zealand as part of a major survey and genetic study of peripatus. The image on the left was taken by S. Moore. 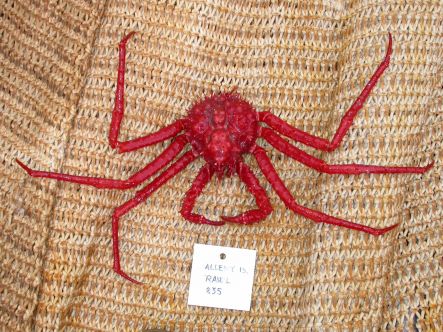 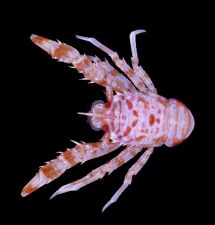 The deepwater king crab pictured above, Neolithodes yaldwyni, was collected from the Ross Sea region in Antarctica (Photo: Shane Ahyong). On the right, is a deepwater squat lobster, Munida collier, from the Tasman Sea (Photo: K. Gowlett-Holmes).

The National Institute of Water and Atmospheric Research holds the country's most precious collection of marine invertebrates living on the sea floor. Shane Ahyong takes Veronika Meduna on a guided tour, and from the thousands of specimen jars, he pulls out king crabs that live on hydrothermal vents, a mantis shrimp that can catch its prey in milli-seconds, various samples of bryozoa and some of the invasive species that have been discovered during biosecurity surveys.