Our Changing World for Thursday 10 April 2008

The endangered Maud Island frog is one of only four surviving native frog species in New Zealand. A small population transferred to the Karori Wildlife Sanctuary in 2006 has recently hatched a brood of froglets - a first for mainland island conservation. In the first of a four-part series on the sanctuary, Dacia Herbulock goes for a nocturnal visit with Kerri Lukis and Ben Bell (pictured below) of Victoria University who've been monitoring the frogs and their froglets. 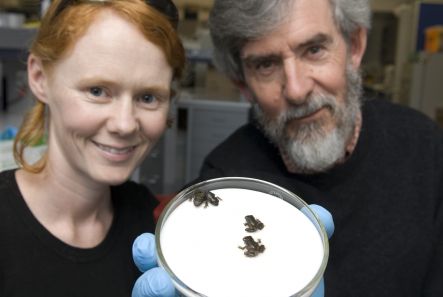 Photo by Les Maiden, from Image Service at Victoria University

Scion, the Crown Research Institute that deals with sustainable biomaterials, is developing a range of processes that not only deal with waste, but create value from it. They're looking into opportunities for nutrient-deficient waste streams, such as those from the pulp and paper, food processing, pharmaceutical and petrochemical sectors, and nutrient-enriched waste streams, such as those from the meat processing, poultry and aquacultural sectors. The goal is to create technologies and products that deliver both improved environmental performance and financial benefit. Trevor Stuthridge talks to Amelia Nurse about these eco-smart technologies and the Waste to Gold programme.

Last month a series of tremors under Auckland culminated in a devastating volcanic eruption. The explosive blast shattered windows, damaged buildings, killed and injured people in a three kilometre radius from the eruption site. If you missed that news, it's probably because this was hypothetical volcano, created by geologists for a real-time national disaster preparedness exercise, called Exercise Ruaumoko. Dacia Herbulock speaks to Jan Lindsey of the University of Auckland and Steve Sherburn of GNS Science about their role in the event, and about scientists' contributions to natural disaster planning - in theory and in real-life.

There seem to have been more butterflies around this year and indeed, a warm summer will encourage them. George Gibbs has been fascinated by these insects from his youth. He's an entomologist and Senior Research Associate at Victoria University. 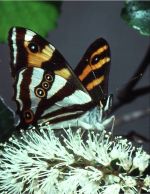 Amelia Nurse went to Wellington's Otari Wilton Bush with George to find out which came first - the caterpillar or the butterfly, what they can see that we can't and why we don't eat them.