Our Changing World for Thursday 21 February 2008

All electronic devices, from bike lights to modern computers to cell phones, rely on semiconductors - materials that control the flow of electricity. In 2007, physicist Roger Reeves was awarded the Royal Society of New Zealand's T.K. Sidey medal for his work with indium nitride and zincoxide. As a recipient of this medal, he keeps the company of Sir Ernest Rutherford, who was awarded the medal in 1933. Amelia Nurse talks to Roger Reeves about semiconductors, energy efficiency and new applications of energy technologies.

Coral reefs are often described as the rainforests of the oceans and the Philippines was recently declared as 'The centre of the centre of marine shore fish biodiversity'. Yet its reef system is on a knife edge - due mainly to increasing numbers of fisherman exploiting the reefs, many of whom have resorted to destructive and illegal fishing methods. But new links between scientists, local government and the fishermen to establish community managed fisheries may help restore the balance between sustainable biodiversity and the livelihood of its fishing communities. In the third part of our Balancing Nature series from the ABC, Lynne Malcolm visits scientists in the Philippines to see how they are hoping to accelerate the process of natural reef recovery. 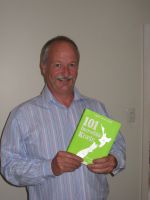 As sustainability becomes more of a necessity than a choice, we're having to rethink how we use energy and what we do with our waste. Richard Williams is at the forefront of people who are thinking creatively about what we make things out of. His company, Potatopak, is using the starch extracted from waste water from potato processing to make plates and containers. Amelia Nurse meets him at his Blenheim factory for a tour and a chat.