The sonic splendour of the Soundbeam

You've heard of singing the blues? Well, at Living Options in Alexandra, Central Otago you can dance the blues or any other music genre you please, courtesy of the Soundbeam. The device uses sensor technology to translate body movement into sound and music. And its one of several forms of music therapy used in the Central Otago facility which supports people with intellectual and physical disabilities.

The musical tutor, Matt LaHood says notes are created as people move closer to or further away from the Soundbeam. And he says offers creative expression to all, regardless of their vocal ability. "Its very cool because, you know, for some people that can't verbally communicate, this thing's amazing because you basically just need to be able to move a little bit."

To prove the point, Brent Clark creates a blues riff whilst seated in a chair. He's been a fan since he discovered the Soundbeam. "As soon as I started on that, I just thought that was really marvellous and I still think it’s really great".

John Halliday uses the Soundbeam to dance the blues.

Katy Gosset tries her hand (and the rest of her body) at some hard rock using the Soundbeam.

But the music doesn't stop with the Soundbeam. When One in Five pays a visit, the Alexandra locals supported by Living Options are rehearsing their numbers for an upcoming "Stars in Your Eyes" competition. Featured artists include John Lennon, Bob Marley, Adele, Glen Campbell and Lady Gaga. And Templar Smith is looking forward to being the centre of attention with his rendition of LMFAO's Party Rock Anthem. 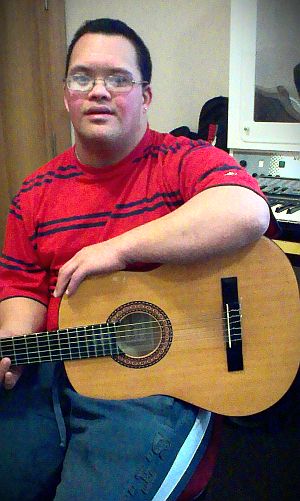 Camille Alabaster says Living Options is not a residential service but instead provides staff to support people with intellectual disabilities in all aspects of their lives. "It may be that they're working in the community and they need some support from us to do their jobs, to stay in employment. It may be that they need support to go to the dentist or the doctor or maybe to do some personal shopping and that's what our supported living staff do."

She believes Alexandra is an inclusive community compared with some other centres where she says people with disabilities can be segregated in a particular part of town. "We're small so most of the guys who we support are known in the community. If I go downtown to help somebody with their banking or shopping, or whatever, the guys know more people in this town than I do."

Camille Alabaster says it's also a rewarding workplace. After initially helping out for a couple of hours a week, she soon found herself coming back again and again to what became an extended family. "I feel as if I'm making a difference now. It's a bit like being a mother where you're supporting people to be independent eventually and go out into the world. My family have, and now I feel as though I'm doing the same sort of thing, just helping people to really grow and be who they're meant to be."

Photo: John Halliday is learning the guitar at Living Options