One in Five visits a Caversham flat to catch its five busy inhabitants before they head off to their South Dunedin campus. Like most flatmates they take turns cooking, doing the chores and they often hang out with each other. But each has an intellectual disability and their living arrangements and campus day programme have been desiged by the Otago-based organisation, Pact, to offer a better quality of life.

7:45am in a student flat in Dunedin. And its all go! There are five flatmates: Ben's still getting his shoes on, Stu wants to watch TV, John's ready but can't find his lunch, Tereena's going to spend the morning listening to music and Gabe seems to be the only one eating breakfast. So far, so ordinary. And for these flatmates, all of whom have an intellectual disability, it’s a welcome taste of independence. 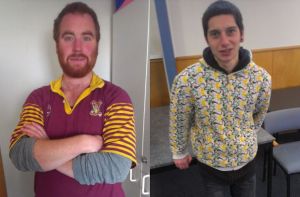 The flat is owned by Pact, an Otago-based organisation that supports people who have intellectual disabilities or are recovering from a mental illness. But the flatmates pay the rent themselves using part of their invalids benefits and they also carry out many of the domestic chores, with a bit of help from Pact employees.

A support worker, Rebecca Miller, says Ben and Gabe have lists of chores in their bedrooms which include cleaning and wiping surfaces, doing dishes and folding washing, while the others help out as necessary. "Yep, Tereena will hold onto the vacuum cleaner hose, so they all do their own wee thing." Tereena does not verbalise but claps once for yes and twice for no to indicate her preferences."

Meanwhile John communicates using Makaton, a form of sign language that he has adapted himself and which everyone has come to understand.

Rebecca Miller says that's always one of the first things for new staff to learn. "So you know, you're not just assuming he's signing one thing and saying "Oh, yeah, that means that." Staff share that knowledge for the sake of John so he's not getting misinterpreted."

Domestic life appears harmonious with the flatmates saying they often hang out and watch TV together or go for drives.

Rebecca Miller says the focus is on encouraging independence and giving the flatmates new choices, such as what they'd like to eat rather than simply presenting them with a menu. "Being able to say, 'Well, actually, I don't like that, but I would like to try this and I've tried it but I don't like it.' That's OK 'cos that's how we learn. Everyone learns by trial and error."

Pact's Chief Executive, Louise Carr, says the philosophy of independence extends to the day programmes and many of the people Pact supports also attend its Armitage Campus in South Dunedin. She says these days many young people with intellectual disabilities have never lived in institutions and come out of school with a real desire to be part of the community and to enjoy the same things other young people would. She says the day campus offers them an opportunity for life-long learning as well as social contacts. "Most of them want friends, some of them would love to have a relationship, a romantic relationship. They want somewhere nice to live and they want something that they really want to do."

Gabe out camping and bungy jumping