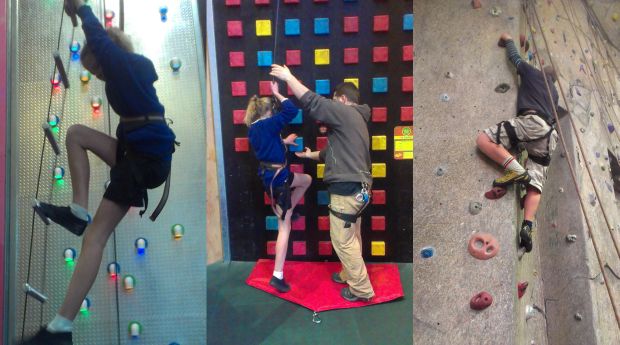 Some Central Otago youngsters with disabilities are scaling new heights, courtesy of a local sports programme.

Game on Everyone was set up by Wanaka parents whose children are autistic, or have learning difficulties, to provide a better range of activities.

An organiser, Claire O'Connell, says, while living in a small town has social benefits for her child, there are fewer sporting opportunities.

And she says children with learning difficulties often need a one-on-one approach to make progress.

Katy Gosset heads along to Wanaka's Base Camp Climbing Centre to meet the young people as they make fresh ascents on the rock walls.

Thirteen-year-old Ferdia O'Connell is transfixed by the flashing lights on the radio recording device.

And it's taken that to lure him away from the rock face at Wanaka's Base Camp Climbing Centre where he's become adept at scaling the walls.

It's one of several activities introduced by Game On Everyone, a sporting group set up by local parents, Claire O'Connell, Jason Pryde and Leanne Little.

Claire O'Connell says all three have children with intellectual disabilities and wanted more activities to challenge and extend them.

But she says children with learning or attention-related difficulties often need a one-on-one approach to make progress. "Once you introduce noise into it and other kids moving about, they can't follow the instructions – they just can't participate."

"They can't understand the rules of team sports so therefore they can't play the games so they don't tend to get out as much as the other kids might."

Claire O'Connell says, while living in a small town has social benefits for her son, there are fewer sporting opportunities. Her son, Ferdia, was diagnosed with Autistic Spectrum Disorder which manifests mainly in a lack of language. But she says the Game On Everyone activities and, in particular the climbing, have proved a huge benefit to him. "It's helped his determination, his sense of trying it again, even though it's hard. This place has been fantastic for him."

And she says she can still remember the moment when he first made it up the rock wall. "As his Mum I knew he could do it. He didn't want to do it and I made him go up there. He was in tears by the time he got to the top and I'm sure everybody else in the place was looking, 'look at that terrible mother, making her child...' But you should have seen his face, the sense of achievement when he made it."

Jason Pryde has brought his daughter Shenee to the climbing session and says he helped establish the group to ensure she could participate in more activities. "I think every day for her is small steps, you know she can ride a bike, she can do all sorts of things. She's up doing some skiing."

"Again, we just can't sit and let these guys just sit there and watch – they've got to get involved."

Game On Everyone has just launched a new climbing programme, with swimming to follow and organisers say they'd like to see more adults with disabilities joining the group.