We're back with all new episodes. Starting with the man, who a decade ago was appointed New Zealand's Permanent Representative to the United Nations in New York - and made him privy to a defining point in the life of that fair city. Don MacKay well remembers 9/11 - back in the days when he led the New Zealand mission to the United Nations. Before he retired a few months back, Don MacKay was New Zealand's senior official at the UN in Geneva. While in that role he helped negotiate a treaty banning cluster bombs. But wind back four years and it's negotiating the critical sessions in developing an agreed text for the UN Convention on the Rights of Persons with Disabilities, that Don MacKay says was truly a highpoint in his diplomatic career. And with New Zealand's ratification of the Disability Convention done and dusted - it's easy to forget how near we came to not having a Convention at all. As Don MacKay reflects on the experience. 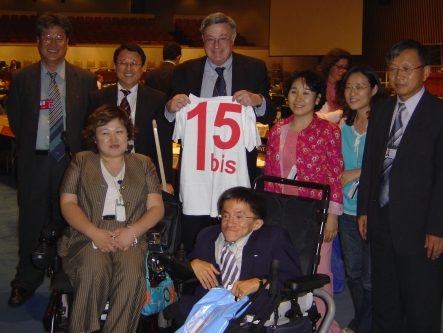 Ambassador Don MacKay (with T-Shirt) and members of the South Korean delegation.