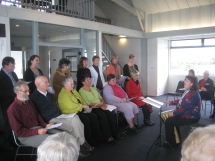 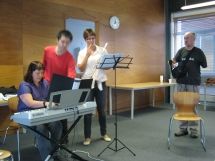 The CeleBRation Choir (left)is the 'brainchild' of the brain research centre, at Auckland University's School of Population Health. The School's Tamaki campus may not have the best acoustics for choral work, but it's handy for the many people who regularly attend rehearsals. They're folk who're affected by conditions like Parkinsons, or who're recovering from Stroke. As I meet with choir members and talk with Brain Research centre communications and liaison officer, Laura Fogg, I can't help but get caught up in the fun and enjoyment that's also therapeutic. Photo above right: Mike Gourley records audio, while Alison, Collin and flautist Vicky prepare for rehearsal.

The state of rural mental health - a matter for concern

Taranaki Like Minds manager, Gordon Hudson describes himself as a man of the soil. Which he says has put him in touch with the way rural life has been decimated in recent times by boom and bust pricing, not to mention drought. And Gordon Hudson reckons that's had a negative effect on farmers mental health.

Photo: Out of Town - Like Minds manager Gordon Hudson talks with members of a Taranaki rural community.