In the land of the free 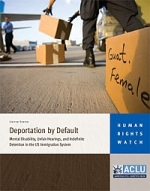 The US Human Rights Watch organization in association with the American Civil Liberties Union has just released its report on the plight of those with intellectual disability or mental illness caught up in the US Immigration and Customs enforcement system. Headed up, Deportation by Default - Mental Disability, Unfair Hearings, and Indefinite Detention in the US Immigration System, the report's written by Sarah Mehta (right).

She's an Ayreh Neier fellow with Human Rights Watch. Sarah Mehta says it's time to wake up to a human rights crisis in immigration control.

At the end of the day

Outgoing Human Rights Commissioner Robyn Hunt is leaving after an eight year stint in the job. Against the backdrop of her official farewell, I catch up with Robyn Hunt and talk to her about her time with the Human Rights Commission. Of particular interest is how, as a noted disability rights activist, she's coped with the need for compromise in resolving complaints and wider discrimination issues.
Photo below left: Robyn in front of the banner from the Ivory Coast which reads (roughly translated) 'Beat disability. Honour New Zealand for your fight for disabled people.'

Photo below right: Robyn Hunt admires her farewell gift from the HRC as chief commissioner Ros Noonan (foreground) looks on. 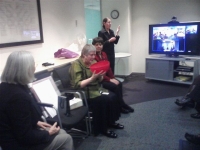