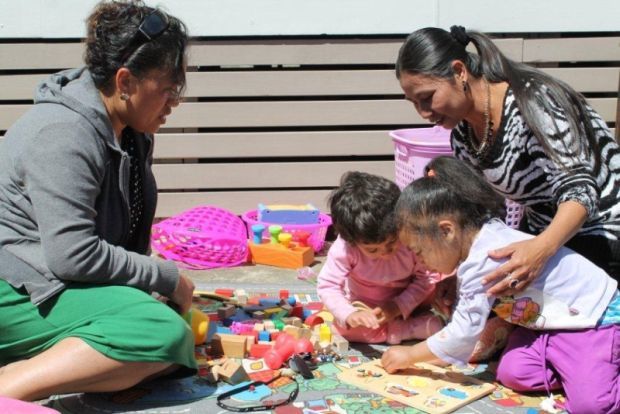 “Part of our kindergarten service is to work close alongside refugee agencies and look at how we can further support the refugee communities. This programme was part of a government initiative to encourage engagement for Pacifica and other communities that haven’t been actively participating in any Early Childhood Education. It sits nicely alongside He Whānau Manaaki Kindergarten values and principals around encouraging quality education for all groups in New Zealand.”

Etu Ao Homebased Learning are creating T.O.N.I. Educators (Teach, Observe, Nurture and In-home) in a 12 week course. The tutors from He Whānau Manaaki (formerly Wellington Kindergartens) train stay-at-home parents from the Pacifica or refugee communities in cities like Porirua to become in-home educators for small groups of 3 or 4 children. They work alongside kindergartens and centre based early education organisations.

Three Burmese women (trained in the Level 3 National Certificate in Early Childhood) are about to graduate as home based educators with more trainees in the making. In the true spirit of inclusiveness, these Burmese TONI’s were trained by the Pacifica community in Porirua.

The first thing that greets me is laughter as I enter the Porirua Union Health Community Rooms during the last day of their training. Gillian Dodson is the group tutor. This group of around 20 women, largely Samoan and Cook Islander are flanking a small group of Burmese  from the community. Gillian has been going over the basic principles of TONI for my benefit – but she’s also presenting the women with their emergency ration kits for the start of the first week. 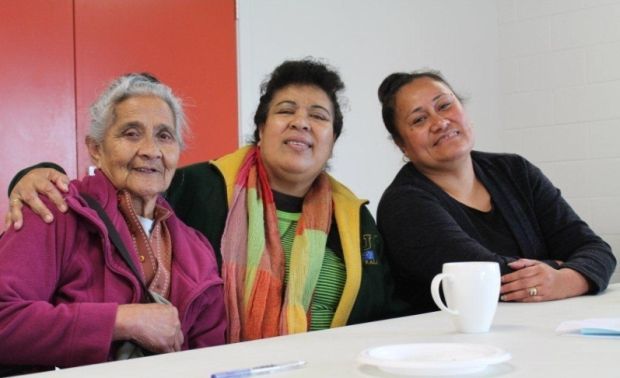 Its a family affair, TONI participant with her mum (left). Photo RNZ.

A couple of Samoan women have a friend translating. Some parents will have plenty of motivation to learn but very little English. Manamea, the Samoan translator says; “One of the reasons why I love this course is because I learn a lot about other cultures.”

A Samoan grandmother is there with her two year old granddaughter. By their very presence these children become a natural part of the training course; “It’s really important to me this course – I’m meeting these wonderful ladies! (lots of laughter from the group) “I’m know more about parenting, I am making friends and getting out of the house.”

The sole male in the room is Venerable Nyaninta, making a visual statement in his saffron robes. “Nyaninta” means “person who belongs to wisdom”. Venerable is from the local Buddhist Monastery and an Arakanese Burmese. Venerable became a TONI graduate last year as well. This was so he could facilitate translations for new trainees. He is flanked by two of the three graduates; Kau Mai (Kachin ethnic group, Myanmar) and Pascaline (the Kaya State). Softly spoken he tells me that the Samoan and Burmese women have learned so much about each other, about the universal aspects of their cultures, such as; living with extended family, including elders and a common sense of celebration of food. There’s a lot of talk about favourite recipes at this point.

Kau Mai tells me one key thing she has learned is how to take care of children from the Burmese community within New Zealand’s environment and culture. Another important aspect of this 12 week programme is getting to know where all the community resources are for their families. It’s the first step in breaking down isolation.

After the class I follow Lofi to the home of one of the first Burmese women to graduate. Kyi Kyi came to New Zealand nine years ago with her husband and child.  As former refugees they’re now role-models and community leaders. Lofi has been Kyi Kyi’s visiting teacher – working closely alongside her at home and touching base regularly. They’ve become friends in the process.

And following the theme of forging friendships and widening the community, Kyi Kyi got her friends Kau Mai and Pascaline interested in the TONI course because she led by example. Her enthusiasm rubbed off them, they became intrigued and then became TONI students themselves.

A key motivator: Kyi Kyi wanted her own 2 year old child (now four) to be integrated into New Zealand’s early childhood education and society. Kyi Kyi did not want any of her her children to remain isolated until they started school, where it was often too late to catch up.  Kyi Kyi currently has four TONI children in her care, all from her neighbourhood. The working parents are grateful to leave their children with someone TONI trained as well as familiar to their child.

Pascaline says this course is very important in her life – she’s learned how to support the children from within her Burmese community, how to give them many more opportunities and a better start in life. These children will grow up with friends from the neighbourhood and the Pacifica community. The sharing of knowledge and culture is a two way process through TONI in-home educators.