“It’s hard not to cry today. This is how we dream our future to be.” Chairman of Ngai Tai ki Tamaki, James Brown.

A day out on “Rangi” by David Steemson

Thirteen Auckland tribes have won back ownership of some of Auckland’s most significant volcanic cones and islands. And the differences this will bring are already showing. All this is as a result of the Ngā Mana Whenua o Tāmaki Makaurau Redress Act  which came into effect on the 1st of August.

As settlements with the tribes are completed the volcanoes and islands will be gifted back to the crown but the tribes will retain some legal rights and ownership to parts of the landscape that are important to them. For instance the Tihi or top of Rangitoto island is part of the settlement for all the tribes known as The Tāmaki Collective, while the individual tribe, Ngāi Tai Ki Tāmaki will set aside over 50 spots on Motutapu next door.

Rangitoto and Motutapu Islands were ceremonially handed over just a few days of the new act coming into force. I went along to see for myself.

There was a howling gale at the new seven-million dollar wharf on Rangi, but the Fullers ferry docked with great care, and disgorged the visiting party, mostly Department of Conservation staff, their minister Nick Smith, the media, and  members of the last remaining families who’ve held bach leases on the island for a hundred years.

On Rangitoto a big party from the 13 tribes was ready to greet us with a haka powhiri. The spine-tingling sound of the women’s karanga was swept away by the fifty knot winds. We all had to walk through the carved totara waharoa or gateway. It’s the work of Ngāi Tai carver Reuben Kirkwood and the first of many carvings to be placed around Motutapu by the tribe.

The Chairman of Ngāi Tai ki Tāmaki, James Brown, says his tribe lived on Motutapu at the time Rangitoto erupted from the sea. Famously members of the tribe left footprints in the volcanic ash o Motutapu, now preserved at Auckland Museum. He says the top of Rangitoto has a new legal name, Ngā Puna toru o Peretū which means the  “three knuckles of Peretū” and named after the revered ancestor Peretū who had only three fingers on one hand. The new ceremonial gateyway is called Te Waharoa Peretū. 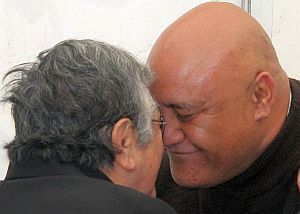 James Brown says the changes are only a first step. He hopes the community will  keep “nurturing and improving”, so that Aucklanders can come to understand what the local tribes stand for, and be proud of them. “There’ve been many tears during the last five years of negotiations. Today these are happy tears.”

The Department of Conservation will administer the islands in close consultation with the tribes. The volcanic cones will be governed by a new authority called “Tūpuna Maunga o Tāmaki Makaurau Authority”. That will comprise members of local tribes, Auckland council and one non-voting representative of the Crown. It meets for the first time this month.

What other people have said

“This is a most important event for all of Auckland. It recognises the importance of our volcanic cones to mana whenua in a tangible way. It should ensure on-going active care and respect for our tūpuna maunga.”
– Auckland Mayor, Len Brown.

“The legislation completes five years of collective tribal endeavour. As the tūpuna maunga are iconic, so too will the face of Auckland be defined in the generations to come by Ngā Mana Whenua o Tāmaki Makaurau.” – Tāmaki Collective chair, Paul Majurey

One in seven people usually living in New Zealand in 2013 belong to the Māori ethnic group, and nearly a quarter of all Māori live in the Auckland region

The percentage of people who identified with the Māori ethnic group increased in almost all regions between 2006 and 2013. The two regions with the biggest increases were:

Only two regions did not have an increase in the percentage of Māori: