New Zealand in Afghanistan – why did we support this war?

"The film asks three simple questions. Why did we go to Afghanistan? What did we do there? And why did we hear so little about it?" 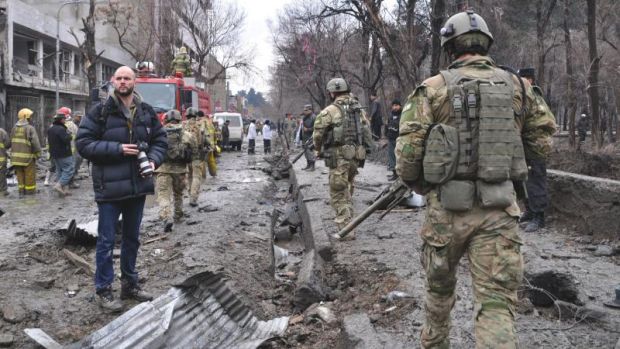 A scene from He Toki Huna: New Zealand in Afghanistan. Photo by Lionel de Coninck

After the terrorist attacks of 911, New Zealand responded by sending troops to Afghanistan to participate under the US-led ‘ISAF’ military umbrella. The stated aims of the occupation were initially to dismantle al-Qaeda and arrest Osama bin-Laden, but the mission soon extended to removing the Taliban regime and introducing a form of democracy.

But exactly why did we send our troops to Afghanistan? What did our troops actually do there? How much do we know about this war? Investigative journalists and documentary filmmakers are not the only ones asking questions, now it’s secondary students across the country.

The multi-award winning documentary He Toki Huna: New Zealand in Afghanistan (2013) is now being taught as part of the NCEA curriculum within History, English and Media studies programmes at secondary schools thanks for a grant from the Peace and Disarmament Education Trust (PADET) .

PADET was established from money received by the New Zealand Government from France as compensation for the Rainbow Warrior sinking in 1985. The grant enabled the filmmakers to donate a free DVD to all schools, plus to commission the writing of two study guides to accompany the film, one for the History curriculum, the other for English/Media Studies. These were written by University of Auckland student Alex Edney-Browne in association with the filmmakers.

Professor Annie Goldson is Head of Media, Film and Television at the University of Auckland. Colleague Kay Ellmers of Tumanako Productions teamed up with Annie to create this documentary. The documentary uses independent journalist Jon Stephenson’s reportage on the ground in Afghanistan as its backbone and includes a broad range of voices from military leaders, soldiers, journalists, academics and members of the Afghan community in Bamiyan and Kabul.

I start by asking the film-makers why the title? We’re squeezed into Annie’s office in the Faculty of Arts at the University of Auckland, surrounded by posters of her other award winning documentaries. Kay explains: “It comes from the whakatāuki “E kore e kitea he toki huna” which literally translates to; “a hidden adze is difficult to see,” but more metaphorically refers to hidden agendas and questioning the motives as to why people do things and so obviously had references to war as well. We were looking at the real agendas as to why New Zealand was getting involved in Afghanistan.”

“It struck us both that we knew so little about Afghanistan. In fact it has been our longest war, longer than World War 1 and 2 combined and yet we’d heard almost nothing about it,” says Annie. “Of necessity, the themes of the film brought up the issue of media coverage of international issues and particularly of war.”

Kay travelled to Afghanistan in order to follow Jon Stephenson on the ground. “Ordinary Afghan people were cynical about the international forces, believing they were there for their own purposes, not to help the Afghan people,” explains Kay. “You can’t impose democracy, it has to be created internally, supported by the will of the people.”
“New Zealand forces in Bamiyan were engaged largely in patrolling and security. They spent very little time undertaking reconstruction and development, “ says Annie. “I think we were misled about what our involvement was in this war. One thing we’re both proud of is that you actually hear Afghan people in our film, talking about what they think about New Zealanders being in their country, voices that are largely missing in mainstream media coverage.”
At Cashmere High School our Christchurch correspondence Katy Gossett interviews Year 13 Media Studies student Sam Walls and his teacher HOD Media Studies Richard James. Sam says it was really interesting to hear from the locals; “In documentaries you never really hear the people’s voice, it’s generally from the reporters view point but he [Jon Stephenson] says I am not affiliated with any governments, I am solely here to listen to you.”

Richard was initially bowled over by He Toki Huna when he first viewed it on Maori TV. He’d read Jon Stephenson’s Metro article and Nicky Hager’s book and immediately picked He Toki Huna for use with his senior students. However Richard says it is a very complex documentary better serving only the most senior students who are particularly interested in the relevant areas discussed. According to Richard the documentary’s strengths lie in asking why New Zealand troops were there and how current issues are portrayed in the media. He Toki Huna explains things that aren’t being said in our mainstream media about the war in Afghanistan.

Richard James is clear though that this documentary is only one of several documentaries and viewpoints that he would want students to view, to encourage a wider contextual discussion. It’s probably heartening for the film-makers to hear this as its the very principals held up by investigative journalists themselves; one should never underestimate the importance of editorial independence and our democratic right to enquiry. If students are our next generation of future leaders, then hopefully He Toki Huna is helping them to continue asking those challenging questions.

He Toki Huna was funded Maori Television and New Zealand on Air, with assistance from the research committee of the School of Social Sciences at the University of Auckland.