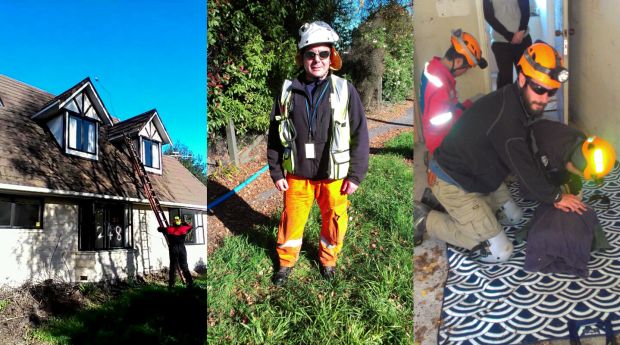 Alan Grigg was 10 years old when the Southland floods struck in 1984 and he was one of 5000 people evacuated from their homes. In retrospect, he says the experience was surreal although, at the time, he didn't have the words for it. "I just remember the chaos, having to try and gather up as much stuff as we could and then get away as quickly as we could. As a 10-year-old it was just a lot of confusion."

But he also remembers the respect and awe he felt for the people who helped: the civil defence workers. "It was somebody who it was very easy for a 10-year-old to look up to and aspire to be something like that. [...] Someone who was really good at something and was able to come in and help people out when they were in trouble."

So Alan Grigg says, when an education programme involving rescue teams came up as part of his school curriculum, he was quick to put his hand up.

Fast forward some 30 years and we find him in Christchurch 's residential red zone as the umpire of a major civil defence exercise.

Mr Grigg played a liaison role between regional and Christchurch headquarters during the recent Canterbury earthquakes and says that experience taught him the value of communication between multiple agencies. He says this exercise unites South Island responders and encourages them to work together using rope work, lateral thinking and some emergency first aid.

One recruit, Anthony Rowan, says he has always liked the idea of volunteering in an area that had some purpose to it and after the quakes he felt an urge to assist others. "I was sitting there thinking, 'Well, my house is mostly fine and there's people out there that aren't as well off as me so what can I do to help?'"

Meanwhile Terry Bolton from Timaru's Civil Defence team says it’s just another way for him to contribute to his community. "Some people coach sports teams, some scouts or guides or rangers. People put things back into the community in a different way and this is the way we chose."

Alan Grigg warns that responders do need to keep some distance between themselves and the people they're trying to help. "As soon as you start to get emotionally involved with those people and feeling what they're feeling, then it affects the way you work as a responder. But he's heartened by the strong turnout from new recruits. "I see a new energy in the volunteer ranks in particular. People feel like they've got a purpose."