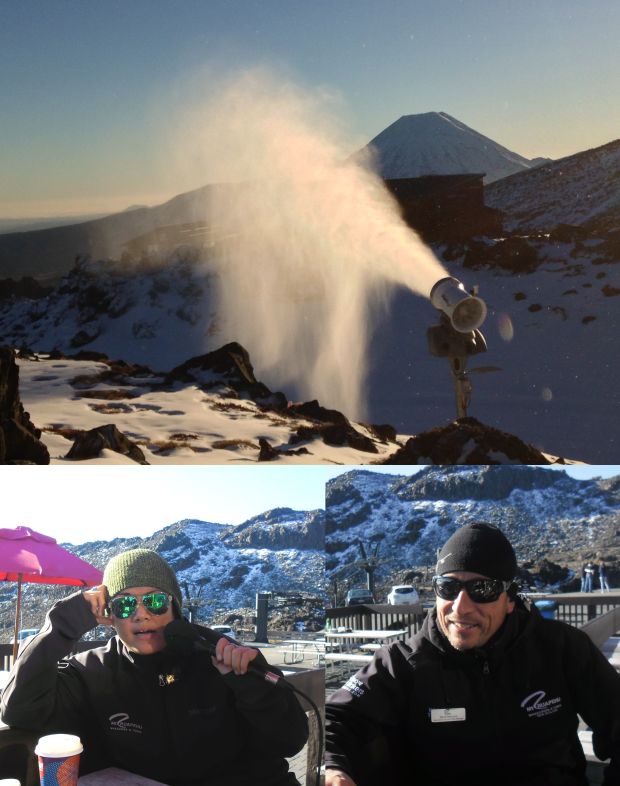 The icy white stuff should be all a glitter, the sky a shiny blue, and the chair lifts and cafes busy as.

But if you go skiing on Mount Ruapehu at the end of this month, the snow may not have come the natural way.

At the Whakapapa and Turoa ski-fields dozens of people are working to ensure the opening of the ski season on the 28th and 29th of the month happens as it should.

If need be, that includes switching on over a hundred big snow-making machines to get the first snow just right for the first batch of ski bunnies.

Chief snowmaker at Whakapapa, Shaz Dragan says Ruapehu traditionally has some of the worst weather at the beginning of each ski season, and it’s tough producing the product in a howling gale.

Ruapehu’s hard rocky surface means it takes a lot more snow to safely cover the slopes, and Shaz says when she’s at it, she’s at it up to fourteen hours a day. If you can make snow on Ruapehu, she reckons you can make it anywhere.

The man in charge of Operations and Snow Trails at Whakapapa, Steve Mananui says all the water used in snow making has to be pumped up the mountain to a 25-million litre reservoir.

The Whakapapa field covers over a thousand hectares on the north-western slopes of Mt Ruapehu in the Tongariro National Park. The park was given to the people of New Zealand in 1887 by local Maori. Steve Mananui’s been working at Whakapapa for twenty-five years. It’s a dream job, but a hard one.

The company that runs the place, Ruapehu Alpine Lifts has a summer time staff of about seventy. In the winter that bumps up to 800. Many of them come back year after year.

If you’re hitting the piste on that first weekend, spare a thought for all those hard workers.