With its origins in the United States La Leche League is a non-profit, volunteer organisation that supports new mothers in breastfeeding.

According to La Leche League Leader, Janet McClean, last year the New Zealand organisation had contact with around 27,000 women. There are 49 groups located across the country and group meetings take place once a month, covering topics associated with breastfeeding and parenting, but more importantly, it’s a chance for women to share their experiences in a safe, non-judgmental environment.

This year the league celebrate 50 years with a conference held in Auckland in October, and the release of their book: Latching On: 50 years of breastfeeding support – La Leche League in New Zealand 1964-2014

You can find out more by heading to La Leche's website. 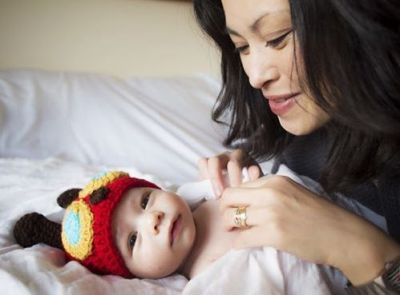 It is encouraged by midwives and health professionals and on the outset appears to be the most ‘natural’ act that any new mother will encounter. The reality is contrary to the ‘imagined.’ No antenatal lesson illustrating how to breastfeed using a crocheted breast as an example (this something I’ve heard has happened in an antenatal class) will ever prepare any woman for what is likely to occur. Nor will holding a plastic doll up to your boob. Uh, nope… not going to help.

When your baby arrives it’s a confusing juggling act. ‘How do I hold this thing? It’s wriggling… its mouth is so tiny… oh dear it’s screaming and I don’t have any milk!’

It’s not quite a blur, but I can remember how bad engorgement was – one day you have no milk – the next day you know how a cow feels at a milking station. You’re abundant – there’s surplus and you’re walking around like Dolly Parton. I’m talking ROCK HARD BOOBS! Yes. It’s a shock to the system. And it hurts. The one thing that you want to do is to release the pressure, but pumping the milk only makes you produce even more, so the pain (and leaking milk) persists. Oh the joy! And by the way ladies… cabbage leaves really do help!

It can take weeks if not months to actually develop a comfortable physical relationship with a breastfeeding baby. I experienced a great deal of pain, so much so, that feeding was terrifying. Each time my little boy latched I wanted to scream and would endure hours afterwards of burning pain in my breast. After numerous doctor’s appointments I tried all sorts of creams and pain relief (although pain killers affected my baby’s reflux). I was told by a lactation consultant that my baby had marginal tongue tie which was possibly the cause for a bad latch on one side. Because the tongue-tie was only marginal it was left as it was. I was advised that I could just feed him on the ‘pain free side’ alone (at the time I thought it weird). Fast-forward a year and that’s exactly what I’m doing… I’m completely lop-sided (but nothing that a little bit of padding won’t hide!).

And if breastfeeding created challenges… the next big hurdle is weaning!