Elizabeth Day: why things going wrong can be so right

Elizabeth has been praised for "revolutionising the way we see failure".

Her How To Fail podcast has topped iTunes charts, and her live tours have sold-out venues such as London's National Theatre. 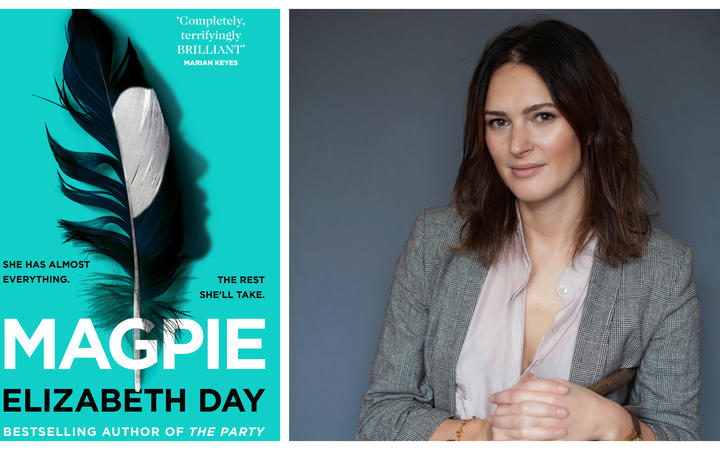 Day writes for The Times, The Guardian, The Observer, Harper's Bazaar and Elle, and is a presenter on BBC Radio.

The title Magpie comes from an old English rhyme, she tells Kathryn Ryan.

“It's an old folkloric rhyme and it goes, when you see a magpie, ‘One for sorrow, two for joy, three for a girl and four for a boy’.

“And it is meant to augur either happiness or misfortune or the gender of a future child.”

Magpies also have a reputation as thieves, lovers of shiny objects, she says.

“And that plays into an underlying theme in the book as well, because the book opens with Marissa who's in her late 20s, moving in with her boyfriend, Jake, and then they take in a lodger. And this lodger Kate seems to take an absurd amount of fascination in their private lives.

“And so, it's really about that sense of being jealous of someone else's life and possessions.

“Marissa does have a complicated upbringing, abandoned by her mother when she was seven. And as a result of that, she has sought out a level of security and stability in the rest of her life.

She is also somewhat blind to flaws in Jake’s character, she says.

“She also is blind to flaws, or maybe willfully blind, to flaws in their own character, because she's so obsessed with constructing that perfect sense of self. And she's worried about what might happen if Jake sees her for who she really is.”

Jake is the product of a difficult upbringing, she says.

“He has this rather monstrous mother, a character called Annabel, who I really did enjoy writing, I have to say, she's a sort of ferocious snob.

“And Jake is the only son, and no woman will ever be good enough for him.”

“Then you've got Marissa, who's frantically trying to show that she's worthy of love. And it's really the tension between the two that provides a lot of the narrative propulsion.”

Motherhood is a central theme of Magpie, she says.

“What it is to parent a child and to bring a child into the world, and how differently that can happen for different women.

The story has a claustrophobic almost Gothic form she says, with most of the story taking place in one house in London.

“Many of those Gothic novels like Rebecca by Daphne du Maurier, or Wuthering Heights, or Jane Eyre, most of them take place in a house that holds its own secrets.”

She also wrote part of it during the first lockdown in the UK.

“The intensity and the claustrophobia that I perhaps was feeling at my own laptop has made its way into the book.”

Motherhood was also very much on her mind as she wrote.

“I created this podcast called How to Fail and one of failures that I wanted to examine in my own life, and it's a self-perceived failure, is my failure to have children.

“Because I've tried really, really, really hard and I've had lots of unsuccessful fertility treatment, and I've now had three miscarriages, and it's been the best part of decade, so trying and failing.

“And the reason I use the word failure is on the one hand, I understand that it's not something I should internalise, it's a matter of biology and there's a limited amount of control anyone has over their own biology.

“And yet I was also made to feel like a failure by the medical establishment who use the language of failure around women who are trying to procreate when it's not happening for them, and also by society.”

There is “an enormous amount of baggage” that comes of being a woman of a certain age, who doesn't have children, she says.

“You are constantly asked about it, and strangers will come up to you and ask you most invasive questions about your uterus, within, you know, three minutes of meeting.

“And this is something that I have obviously spent a lot of time thinking about in my personal life. And I wanted to put it into fiction in a way that I think I would have liked to read it when I was going through my unsuccessful rounds of IVF.”

Most of Magpie was written in the wake of her third miscarriage, she says.

“It was enormously important that in that devastating absence I had something to show for it.

“And so for me, Magpie’s incredibly precious because it stands as a monument to something that isn't here.”

It is difficult to grieve absence, she says.

“There's not a lot of cultural grammar around grieving an absence. And I think for a long time I struggled with my miscarriages, I sort of struggled to think of them as babies, because it was so painful to do that.”

She has spoken to many women without children, as a writer and podcaster, and says in some, a kind of freedom happens when the window for procreation closes.

“Elizabeth Gilbert has written exactly of that release, she got to 45 and she woke up and she was like, OK, well, it's not going to happen. And now I can live my life as this version of me.

“And that's, I think the main thing that I've learned that I don't have to be okay with everything immediately, and that something can still cause me sadness, and I can choose to be at peace with it.”