A powerful documentary which exposed a vast healthcare fraud in Romania has been nominated for two Academy Awards. Collective, which opens in cinemas here this week, tells the story of a 2015 nightclub fire in Bucharest, which killed 27 and left 180 injured.

When a new health minister is appointed, he offers unprecedented access to his efforts to reform the corrupt system. Kathryn Ryan spoke with journalist Catalin Tolotan and film director Alexander Nanau. 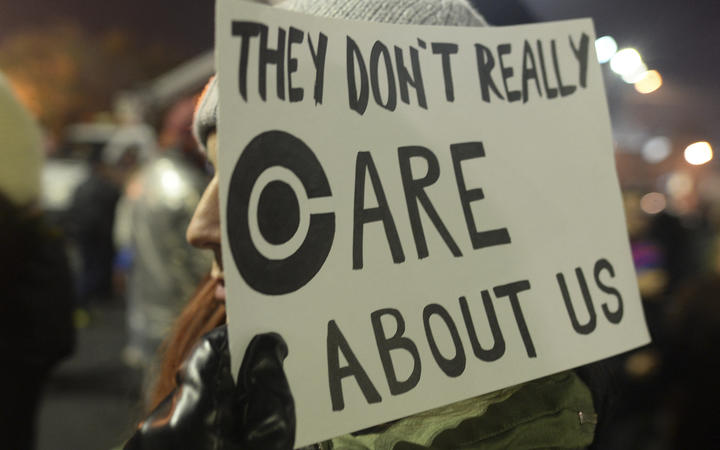 Protesters following the fire and it's handling by health authorities. Photo: AFP

Nanau became interested in making a film about what happened in the healthcare system and was able to capture Catalin and his team investigating it in real time.

“At the same time, we had the biggest demonstrations since the revolution in Romania and I wanted to understand how these corrupt politicians and their officials work in relation to the citizens and Catalin and his team were really the first and only journalists that were really investigating the manipulation that took place.

“We wanted to do an observational documentary which meant we had to find a character whom through their eyes you could follow them for a long time and understand what’s going in society. It seemed like the right thing to do, to try and embed ourselves in the newsroom.”

The paper Tolotan worked at was a sport gazette but he says that, as politician’s became involved in sport, they began investigating politicians.

“The public trusted us because they appreciated the concrete results of the investigations of the past decades.

“The real benefit of being a sport journalist is that you learn, from your first day in this profession, that you can’t please everyone… you always bother someone whether it’s officials or the public.”

One of the bombshells discovered by Tolotan and his team was that disinfectants across the country had been diluted as part of a fraudulent scam.

“I received an email from a very brave source who said they didn’t trust me and didn’t like me as a journalist but they needed to tell somebody that they had a huge problem in their compound.”

The team began researching the claims for five months because they simply couldn’t believe it at first. They found that no one was testing to see what was in the bottles of disinfectant that was used in every hospital, private and public, in Romania.

Nanau says that while he was planning on making the film, he overheard someone who had survived the fire telling their story and asked if he’d like to join the team for the film. He agreed and Nanau says it was a great help in being able to speak to other victims and their family members.

“I think his presence in our team, being part of this family of victims, was a great help to understand that we mean what we say. I’m not just a journalist that only wants to capture their emotions… it gave us access into their private lives which is a very courageous thing to do in such a hard time.

“As a parent myself, I don’t think there is anything more cruel that can happen in a human life.”