Rob Bilott knows more than most about the dangers of so-called ‘forever chemicals’ - the substances used in things like non-stick cookware, food packaging and firefighting foam.

He was working as a corporate lawyer in 1998 when he was contacted by a West Virginia farmer convinced that a creek on his farm was being poisoned by an old landfill.

It led to a major legal battle with chemical giant DuPont, which had been hiding decades of studies about the health effects of PFOA in contaminating drinking water.

In 2017, Bilott won a US$671 million settlement with DuPont which he documents in his new book Exposure. A new film about the story – Dark Waters – stars Mark Ruffalo and Anne Hathaway. 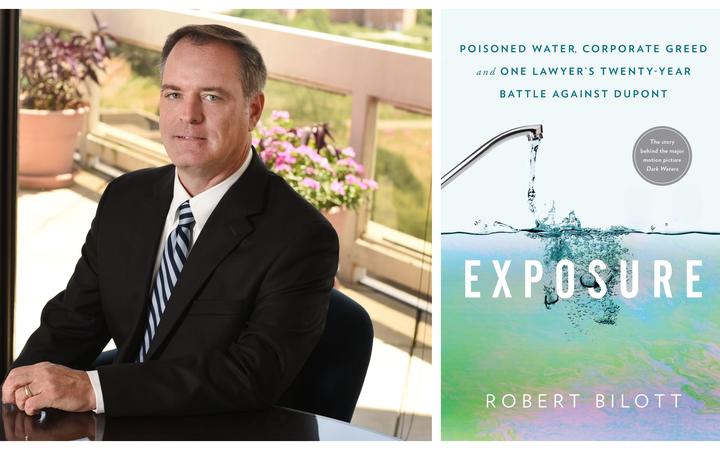 Rob Bilott is currently bringing a lawsuit, on behalf of an Ohio firefighter, against a number of chemical companies over the manufacture of PFAS, or ‘forever chemicals’.

He tells Kathryn Ryan he was actually working on behalf of the chemical companies until, one day, he received a strange phone call.

“In the fall of 1998, I got a call on my office line and a gentleman on the other end started telling me all about cows dying on his property in West Virginia. I wasn’t sure why he was calling me or how he’d gotten my number and I was actually close to hanging up the phone when he blurted out that he’d gotten my name from my grandmother. I stopped and paid a little more attention.”

Bilott says the man calling him had just been talking to a neighbour that had just gotten off the phone with his grandmother.

“My grandmother had mentioned that I was an environmental lawyer up in Cincinnati, Ohio. And so the neighbour told this farmer he had a name for him and to give him a call.”

Bilott says the farmer had been ignored by the local community when he raised his concerns.

“He thought his cows and his property was being poisoned by something coming out of a landfill owned by DuPont which was a huge employer in the town at the time.”

The farmer had captured video of the cows dying and had performed amateur autopsies, finding strange tumours and problems in their bodies. Bilott looked at the images and thought something was seriously wrong and decided to take the case.”

“It was, unfortunately, a long and complicated journey. It first started off agreeing to help the man and his family to figure out what was happening to his cows. We initiated a lawsuit against DuPont in 1999 and started asking them for what I thought would be the most important documents, things related to regulated, hazardous materials at the landfill. After all, this landfill was permitted by the government.”

Bilott says they dug into the documents but nothing explained what they were seeing with the cows or the white foam that was coming out of the landfill and into the creek the cows were drinking from.

“I eventually then asked the company to provide a broader group of documents. Everything relating to what they were making at their nearby plant up the river, and everything that had gone to the landfill whether it was referenced in the permit or not.

“At that point, we got into a bit of a fight with the company. We had to go to court and get a court order that would require those documents to be turned over. When we started getting those documents, a lot of internal files from the company, that we began to realise we were dealing with a pretty much unknown chemical that was not referenced in the permits and one that, frankly, nobody knew much about.”

From those documents, he was able to write a narrative that went back to the 1950s. That narrative is about a chemical called PFOA, and it’s a disturbing one.

“What we saw was a story that dated back to right after World War II. We were dealing with a chemical that had been invented by the 3M company up in Minnesota. They had started selling it to DuPont as early as 1951 and DuPont was using this chemical in the manufacture of Teflon.”

He says the plant in Ohio was the world’s largest Teflon manufacturing facility.

“This was decades before the US created the Environmental Protection Agency in 1970 and decades before some of the first US laws regulating chemicals actually came out. So, we had a massive quantity of this chemical being used and admitted out to the air, into the Ohio River, into landfills where it seeped into the groundwater.

“Even though this is before the government agencies were involved, the companies DuPont and 3M were both studying the toxicity of this chemical because it was very unusual. It was completely man-made, it never existed on the planet prior to the 1940s and it had an unusual chemical structure.”

That chemical structure is the reason PFOA is very difficult to break down in the environment and what lends its name ‘forever chemicals.’

Bilott says the companies conducted animal studies with the chemicals going back to the 1960s showing toxic effects including cancer being caused by exposure to it. In the 1980s, they found that the chemical built up in human blood and didn’t leave the body. In 1984, testing water supplies near the DuPont plant, they found the chemical was present.

“Looking through all these documents, the thing I was noticing in addition to the concern about the chemical itself, it appeared nobody outside the company had been told this. There was this toxic chemical getting into drinking water but the regulators hadn’t been told, the community surrounding the area and was drinking it hadn’t been told and this exposure had been going on for decades.

“Then we realised that around 7000 tonnes of sludges soaked with this chemical had been dug up from the plant and dumped right into the landfill next to our clients' property and that when this stuff hits the water it causes foam.”

Once they had pieced it together, they were able to settle his case relatively quickly. But then they realised they were sitting on a major public health threat that nobody knew about.

“This toxic, cancer-causing chemical that got into our blood, stayed in our blood, built up over time was in the drinking water of tens of thousands of people and nobody knew. The public didn’t know and the government didn’t know.”

They decided to gather all the information and send it to the Environmental Protection Agency which DuPont attempted to thwart with a gag order.

“The EPA started digging into those documents in 2002 and 2003 and started becoming very concerned about this chemical. They opened what they call a priority review and may have taken steps to ban it. They actually bought a lawsuit against DuPont in 2004 claiming that the company withheld information from the EPA about the toxicity of this chemical.”

When the information went public, Bilott and his team were flooded with queries from concerned citizens from the area who wanted the chemical out of the water and wanted to know what kind of effects they might suffer.

“That presented quite a challenge because, at the time, there were no regulations or limits on this chemical. So, we ended up bring a class-action lawsuit against DuPont on behalf of the community that was drinking it in the water. We bought that case in 2001 and within a couple of years we found out that the chemical was actually in six different public water supplies both in West Virginia and Ohio and 70,000 people had been exposed.”

They were successful in the class action with settlement terms that included DuPont putting in water filtration systems and conducting further independent studies paid for by them. They were awarded $US70 million and used that to get blood samples and medical records that could be handed over to scientists so the effects could be studied. Bilott says 69,000 out of the 70,000 people affected come forward to participate.

“By 2012, that independent panel had confirmed that drinking this chemical was linked with six different diseases, including two types of cancer.”

While PFOA has been phased out, many similar chemicals are now manufactured in its stead. Bilott says scientists around the world are raising the red flag about this wider group termed PFAS.

“They share similar chemical structures, they seem to share similar disturbing toxicities, and we can’t just be focussing on one at a time. It took 20 years to bring out the information about PFOA and we really can’t afford 20 years on each of these chemicals.”