The country now has a thriving community of over 30 gin makers who are experimenting with different flavours that are unique to Aotearoa. 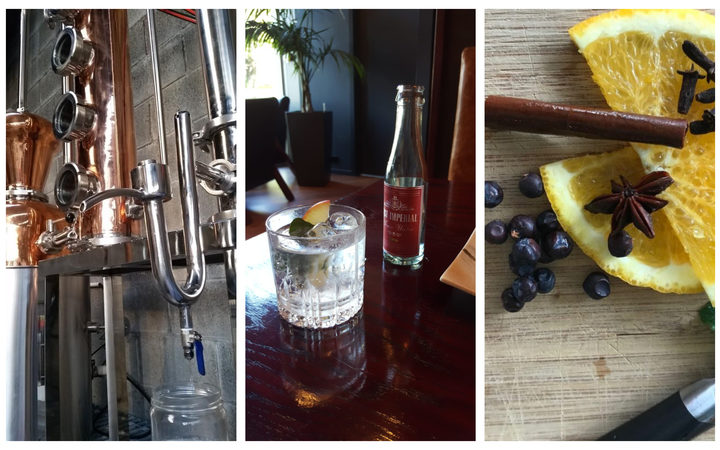 This follows a similar 'ginnaissance' in the UK - and throughout the world - where sales of gin have rocketed. The UK government now takes more in taxes from gin sales than it does beer.

Antony Michalik from the Spirits Workshop Distillery, which makes Curiosity Gin, is one of those bitten by the gin bug.

He got into the business three years ago with three friends with the aim of making a "world beating single malt whisky", but whisky takes time to mature - a minimum of three years - whereas gin can be brought to market much quicker.

So, the company's first release was a gin.

Gin is a flavoured neutral spirit, its primary flavouring is juniper berries with other botanicals giving each gin its unique character.

"Gin traditionally is a balance of different sorts of flavours: the juniper's a piney, herby flavour and it's a balance of that with an earthy note normally from some kind of root, a spicy note - star anise or cinnamon - and a citrus note which traditionally comes from coriander seed and/or citrus," Michalik tells Nine to Noon's Kathryn Ryan.

"Kawakawa which has a really nice herbaceous flavour, horopito for the spiciness, manuka for a sort of floral or piney note or the seed pods part which gives it a sort of earthiness which angelica or iris would normally provide in the gin and we use tarata or lemon wood which is a shrub a lot of people have growing in their garden, those leaves when you crush them give a nice citrus, fresh burst.

"We try and produce that nicely-balanced flavour of a traditional London dry but using New Zealand botanicals."

The main flavouring for gin, however, must be imported.

"Juniper doesn't grow naturally in the southern hemisphere and juniper's not grown commercially anywhere in the world. It's picked from the wild everywhere where it's harvested."

He says the juniper comes for southern European countries such a Croatia, Bulgaria and Italy.

"The juniper plant is a cypress, a type of pine, and the juniper berry is actually a pine cone which takes two or three years to ripen."

He says the ginassiance is "a huge international trend".

"Gin is going to be, by 2020, outselling whisky in the UK so it's a huge growth and it's huge growth in New Zealand as well.

"When I first started three years ago there were maybe ten people making gin in New Zealand, and now there are over 35 - more than 70 different gins on the market."