Rescuing timber from the landfill one beam at a time

Robert Scott is saving waste and surplus wood from the building industry from getting bulldozed into the landfill and restoring it so it for re-use.

Robert and his wife Adrienne got the idea for Reclaimed Timber Traders after helping to rebuild homes in Pakistan in the wake of several major earthquakes. 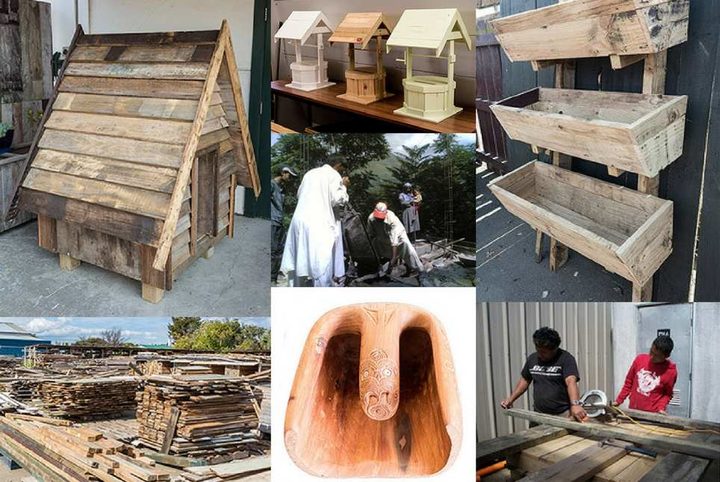 A compilation of images from Reclaimed Timber Traders Photo: Supplied

The couple say the experience gave them a new understanding of the true value of building supplies – which were extremely scarce in the wake of the 2005 and 2008 quakes in Pakistan.

When they got back to Auckland they were taken with the idea of diverting material from landfill and reusing it.

“I couldn’t shake the idea off so I pursued it. I started in Auckland and went to the Lincoln Road transfer station and met with a man and I said ‘Look, can we gather all the wood that comes over your loading area?' And he said ‘Yes, you can. We’d love to get rid of it’.”

“It clogs up machinery, it has to be broken down with bulldozers to force it into the ground, it’s very costly.”

He was amazed when the transfer station manager told him the scale of the problem.

“He said ‘If you go and hire out Eden Park, we can fill it for you in a week’.

"I got a shock from that, all this good material just because it’s labelled 'waste' – which is a wrong labelling, it should be labelled 'surplus' - was going straight to landfill.”

“So we started to plan on getting all the wood and redirecting it from landfill back into some sort of viable reuse.”

They chose Palmerston North as a base – Auckland was too ‘gigantic’, he says.

After establishing “a very good relationship with the local city council” the company soon hit snags when it came to the practicalities of accessing wood from the transfer station.

“The site workers couldn’t make it work for us. Too often we’d see trucks loaded up with wood perfectly good framing timber, going up into the landfill area and we couldn’t get our hands on it even despite the manager saying we should get it, it never happened.”

Scott says they walked away from the arrangement after ten months and are now trying to negotiate with council for their own permanent site and stable supply of timber.

“We’re going back now to the council and they are going to help us set up.”

For government targets on landfill to be met, such initiatives are essential, he says.

“The cost of burying it in the ground is huge, the cost to the New Zealand taxpayer is huge, and we’re just saying we only need a portion of that to get a positive outcome.

“The whole structure of the industry we’re proposing needs to be quite big, it has to be a big industry to offset the waste stream of the current industry.

“It is pretty sad when you see tonnes and tonnes of wood going to landfill every day and it’s a really negative result, with the operation we’re proposing it will give a positive result.”

As for the demolition of old buildings, Scott calls it “legalised vandalism”.

“These boys with their toys, these big machines they’ve got their place, but it’s out of control.

We’ve got the government, on one hand, saying stop landfill, on the other hand destroying government buildings in that fashion. It’s totally barbaric – there absolutely no need for it.”

A house can be dismantled carefully and the materials salvaged without spending much more time than it takes using heavy machinery, Scott says.