The science of aquaponics 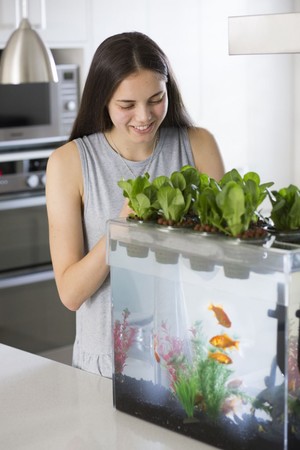 18 year old Georgia Lala is a keen gardener but when her family moved to an Auckland apartment above an antique shop she couldn't find the space to grow plants. But after a trip to Disneyland she had an idea - to create a model ecosystem growing plants in fish tanks where the waste from the fish would feed the plants while the plants kept the water clean and supplied with oxygen.

Her research into aquaponics won her the Prime Minister's Future Scientist award, and she's now set up a company, Root Aquaponics, which she's considering using to sell her specially designed aquaponics kits to homes and schools.

What was the process then of coming to understand the science involved to get your first prototype? How long did that take you?

The idea was in the back of my head for about six or seven years and it wasn’t until the summer before my final year of high school that I knuckled down and was like, ‘Why don’t I just do this?’ No point just sitting and thinking about it. It started off with me reading about it and seeing if there was anywhere in New Zealand that I could purchase a home system I could use. There were just none available and that sparked the idea of ‘Why don’t I just make one myself?’ and so I spent the summer of my high school year nutting away at this little system and trying different prototypes over the span of my summer.

What scientifically is happening in the interplay between the plants, the fish and the water?

In your normal fish tank at home there is basically a nitrogen cycle that is happening, so when the fish either die or they produce waste, waste is broken down first it’s produced as ammonia and then nitrite and then the nitrate. Nitrate in the tank is toxic to the fish and usually if you have a normal fish tank you have to change the water every couple of weeks to remove the nitrates, but what I found is if you add in plants to the top or people have found if you add in aquatic plants to the bottom of the tank, those plants will actually take up the nitrates from the water. What that does is it removes any toxins from the fish tank, so basically you don’t have to do any water changes and the plants can grow because they are using those nitrates as nutrients, basically.

Yeah, it’s a reflection of what happens naturally in nature, but what you find in your fish tanks at home is you’re missing that intermediate step of removing that nitrogen waste.

The tricky bit of course is getting the balance right of plants to fish. How hard was that and what did it involve?

At one point in my home we had about four different containers or fish tanks going at once with various numbers of plants to fish trying to find a perfect ratio, one where enough waste was produced to support the plants but one where the waste removed enough. It was a process to figure out the perfect ratio, but the cool thing now is, when you’ve worked out that ratio you can basically scale up the system as big or as small as you want.