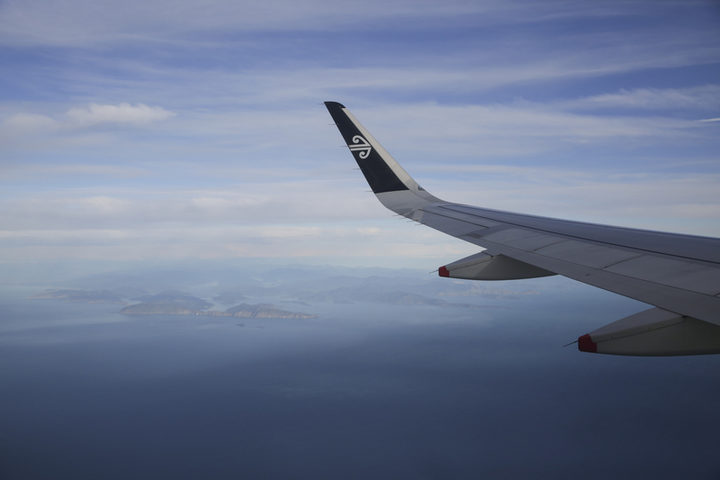 The Minister for Regional Economic Development Minister Shane Jones has criticised Air New Zealand for degrading its services to the regions. Mr Jones's comments come after Air New Zealand's abrupt withdrawal from flights into Kapiti - it gave the region just three weeks notice that it would pull out. Kathryn Ryan also talks with the mayors of Gisborne and Whangarei districts, Meng Foon and Sheryl Mai. 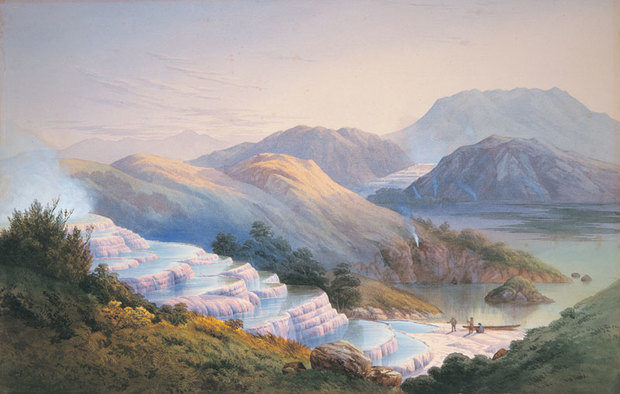 Painting of the Pink and White Terraces by John Hoyte. (Otago University) 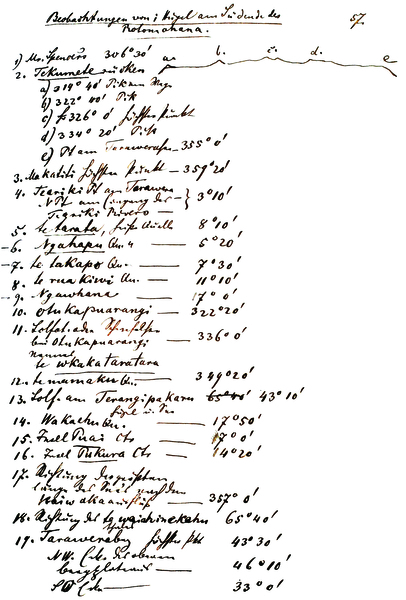 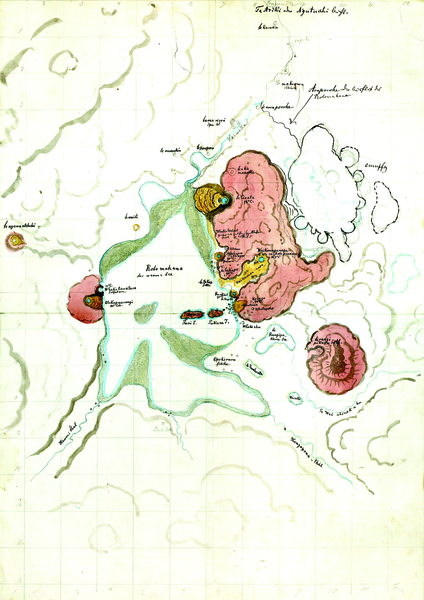 A Lake Rotomahana panorama from the 2016 lake dive, taken from near Hochstetter’s stations 21 and 22. This photo was crucial in establishing Hochstetter’s master-bearings from Koa on Mt Tarawera. 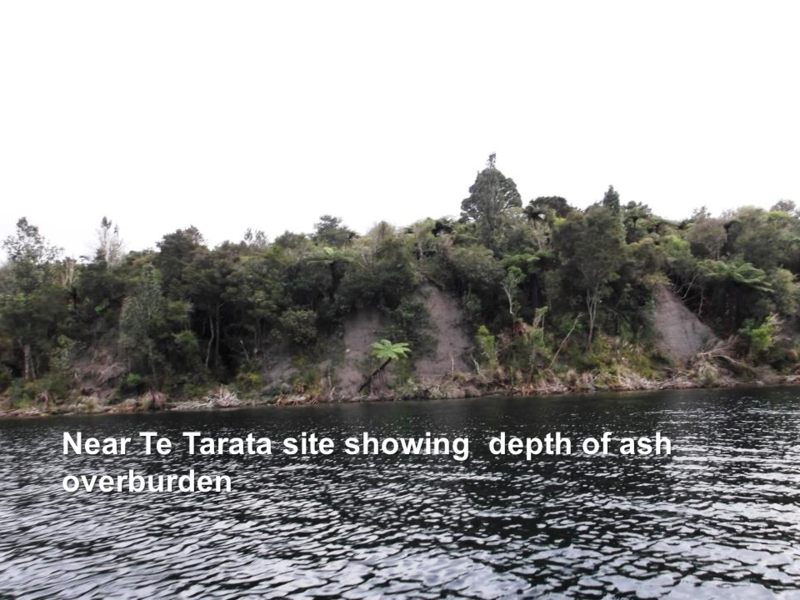 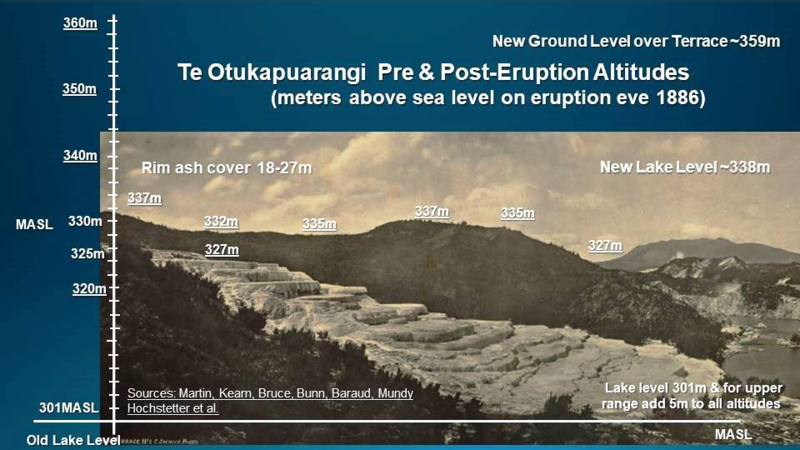 Te Otukapuarangi showing the first accurate altimetry of the Pink Terrace, measured against sea level and the old and new lake levels. 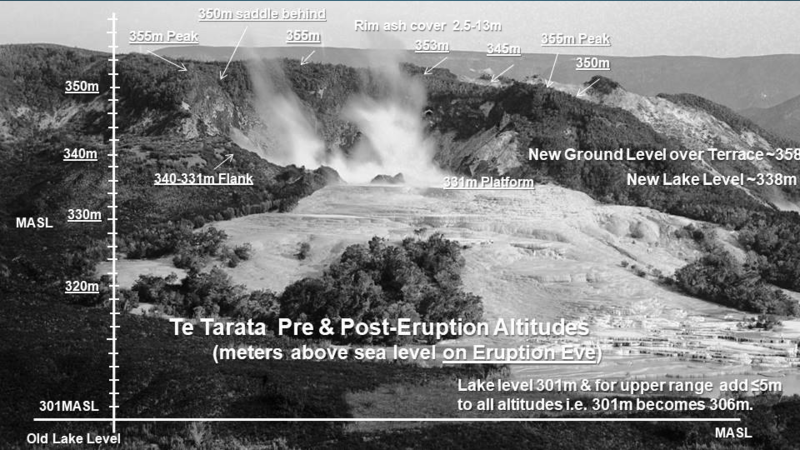 Te Tarata showing the first accurate altimetry of the White Terrace, measured against sea level and the old and new lake levels. 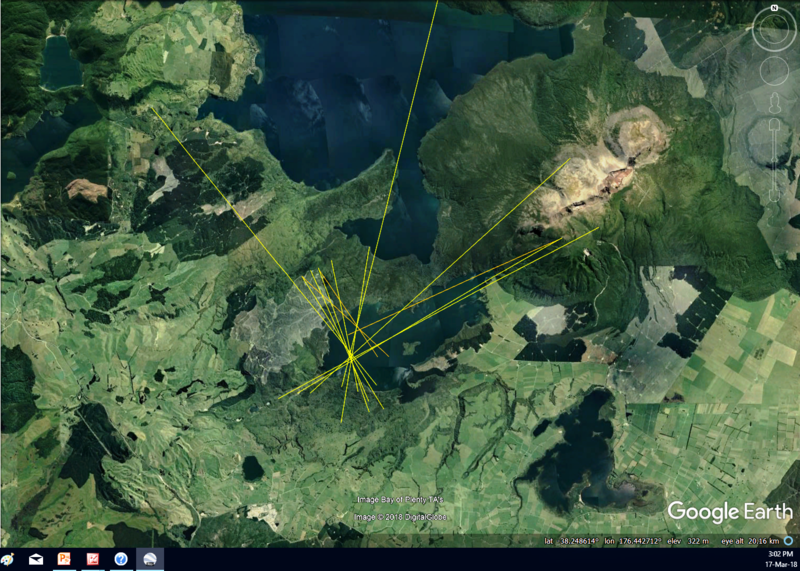 The reverse engineering of Hochstetter’s complete 13 bearing dataset in March 2018, showing his two 1859 Observation stations around the old Lake Rotomahana with optimal accuracy. 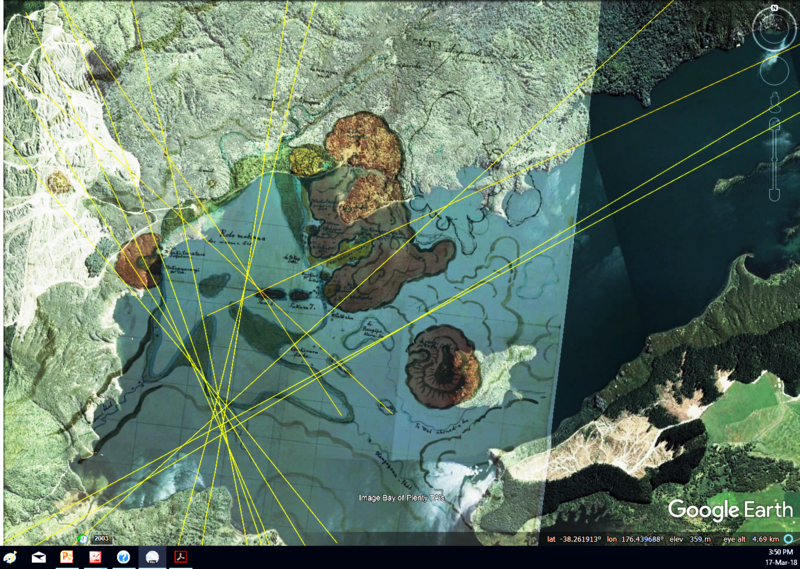 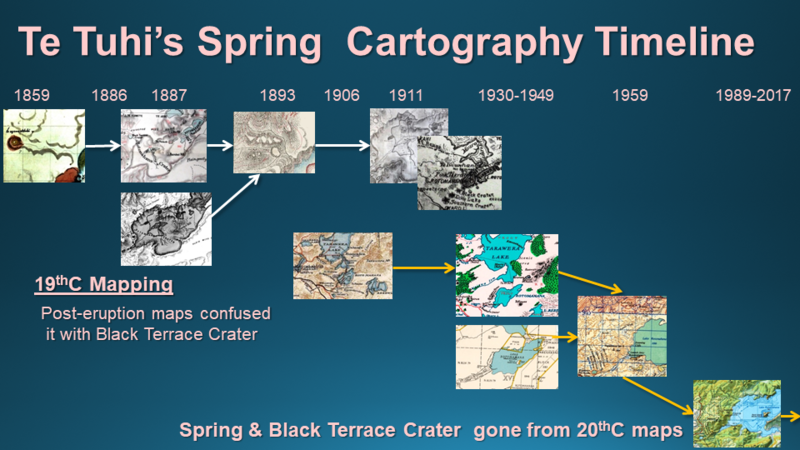 Te Tuhi’s Spring i.e. The Black Terrace, showing how it and Black Terrace Crater slipped from the map in the 20th Century. 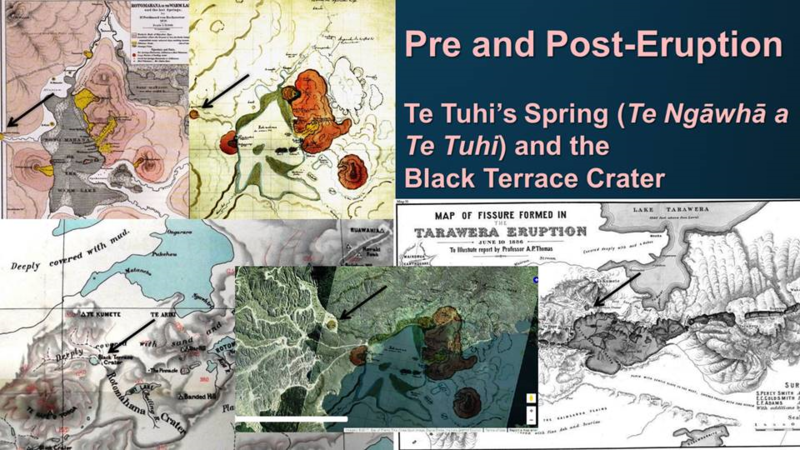 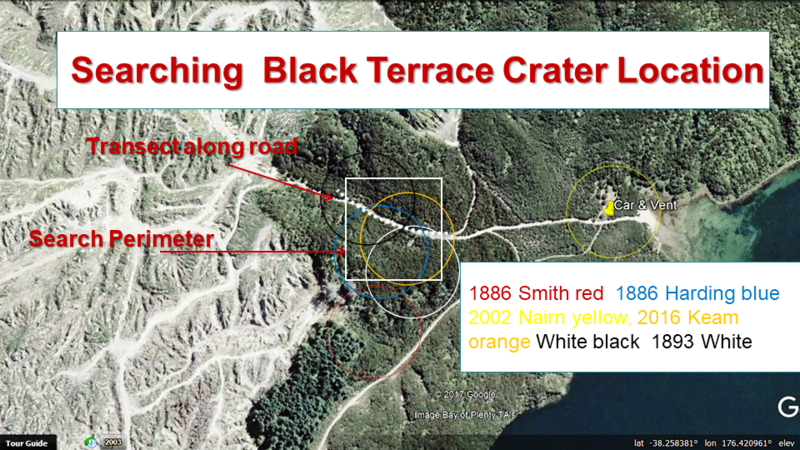 The latest search area for the Black Terrace Crater, (shown as the white square) and drawing on all previous mapping. 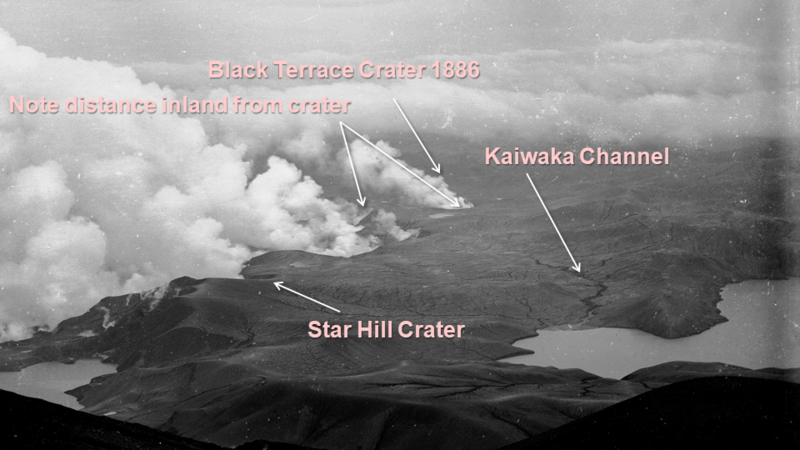 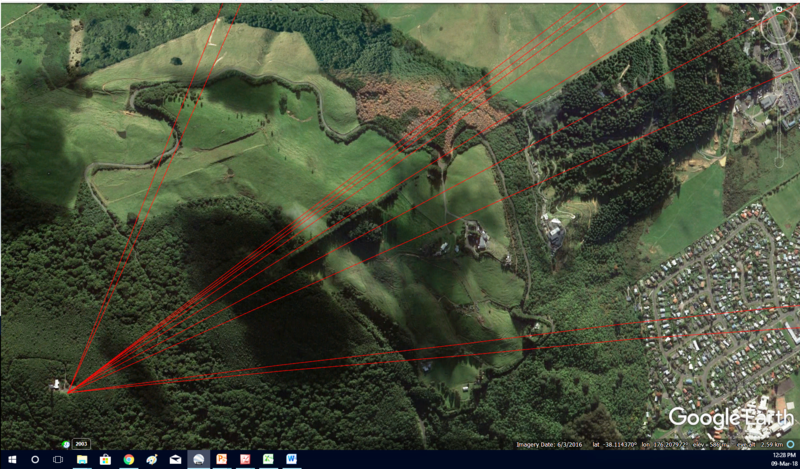 Dr Hochstetter surveyed around Rotorua and we used his Mt Ngongotaha survey to validate the accuracy of his Lake Rotomahana compass bearings. They proved accurate to within one degree. 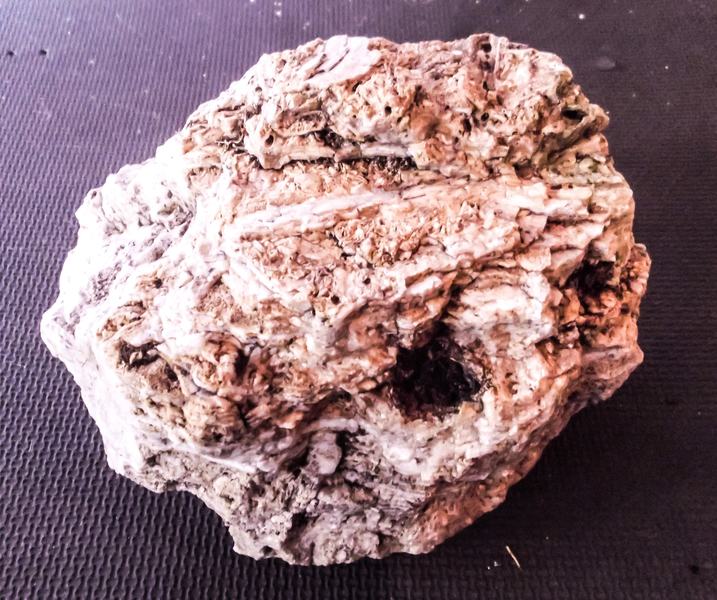 An impressive example of pink-to-white silica sinter, illustrating the colouring of the old terraces.

Researchers have found the final burial site of the famous Pink and White Terraces, 132 years after the Mt Tarawera eruption engulfed them. A full archaeological investigation kicked off in September, using non-invasive scanning to determine if the terraces are still intact. The data showed the terraces were next to the lake outside of the volcanic crater, meaning they could one day be drilled into and excavated and restored for the world to see. Kathryn Ryan speaks with Rex Bunn who led the recent investigation, co-authored last year's Royal Society New Zealand report. 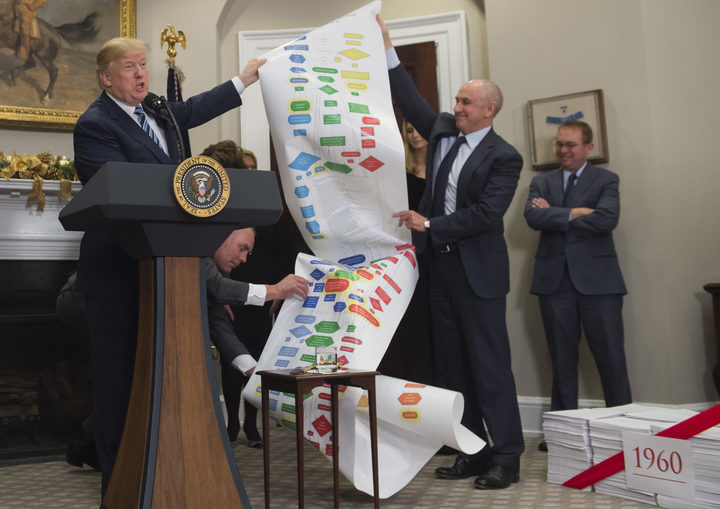 Topics for discussion: President Donald Trump appointment of New Zealander - Chris Liddell as deputy chief of staff; Trumps is once again making noises about firing Robert Mueller; James Comey hits the best seller lists and is a wave of Democrat victories about to start? 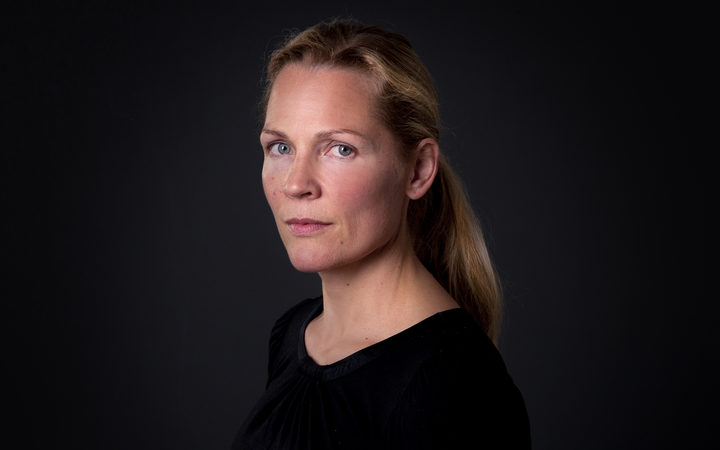 Asne Seierstad is an accomplished writer, journalist and war correspondent, well known at home in Norway and abroad. She covered the Chechen war, the U.S. invasion of Iraq in 2003, the fall of Baghdad, and other conflicts in Serbia, Kosovo, and Afghanistan, and has written a series of books set in conflict zones – including the 2002 bestseller, The Bookseller of Kabul. Her latest is called Two Sisters: Into the Syrian Jihad – a haunting book about two teeenage sisters who join the Syrian Jihad.

Shell sells its NZ gas assets to OMV, an Austrian company – meanwhile the government's considering whether to offer any more oil and gas exploration blocks. And impact investing gains a toe-hold in New Zealand. 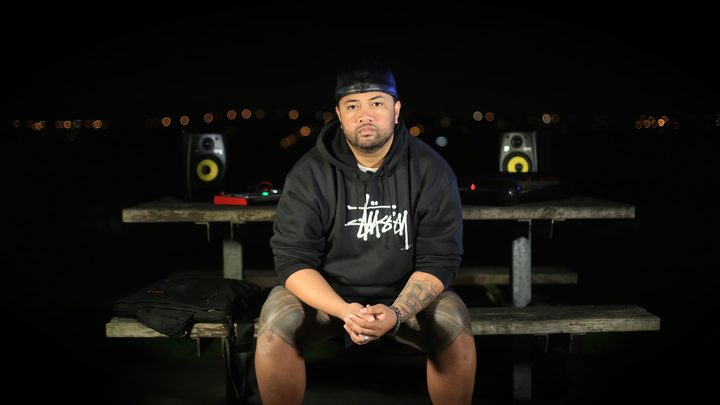 Music producer Anonymouz talks to Kathryn Ryan about the parallels between Sāmoan oratory & Hip Hop. He will be showcasing his work along with a cast of Sāmoan tulāfale orator chiefs, rappers, poets and community performers in 4 THA LUMANA'I. The live performance is part of Auckland Art Festival's wider Whanui. It's on at the Māngere Arts Centre, from 23-24 March. 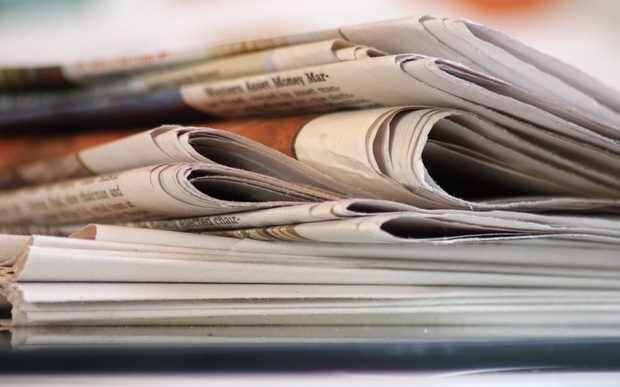 Mindfood celebrates its 10th birthday this month with a 320-page issue. And Gavin has an example of good newspaper journalism. Gavin Ellis is a media commentator and former editor of the New Zealand Herald.  He can be contacted on gavin.ellis@xtra.co.nz