Nine To Noon for Tuesday 8 December 2015

At least 11 new retirement villages are needed to be built every year, for the next forty years to meet demand according to a new report by property specialist JLL.

Representatives from some of New Zealand's largest companies are gathering in Wellington this week to hear from one the world's top cyber security experts, Kristopher Rush from the Software Engineering Institute, or SEI in the US.  The SEI has joined up with Victoria University and the Wellingotn firm Total Risk to develop training, advice and protection services in cybersecurity here.

This comes as a major international survey of 1200 global CEO's by KPMG shows only half believe they are prepared for a future cyber event.

If the world is to limit itself to two degrees of global warming it will need to rapidly embrace new power sources and energy efficient technologies. At the heart of those technologies is a group of about 50 elements with obscure sounding names like Tantalum, Dysprosium, Europium and Neodymium. Collectively they're known as rare earth elements or rare earth metals. The first part of that name is the problem, rare earth elements are, well, rare and what's more they can be extremely difficult and environmentally damaging to extract. David Abraham is the Technology Director at the Rare and Electronic Materials Center at the Washington DC based Institute for the Analysis of Global Security. He's recently authored a book The Elements of Power: Gadgets, Guns, and the Struggle for a Sustainable Future in the Rare Metal Age

Mark Zuckerberg's new philanthropic organisation and claims it is just a way to avoid tax. 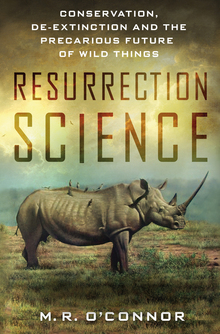 Given the rapid advances in genetic technologies it's been speculated that everything from woolly mammoths, to passenger pigeons, to our own close cousins the Neanderthals could soon walk the earth once more. But if we can recreate extinct species in the lab do we devalue efforts to maintain existing populations clinging on at the brink of annihilation? And even if they can be physically brought back to life, can we recreate the environment and culture those animals evolved to fit over millions of years? Journalist and author Maura O'Connor has plumbed those questions in her latest book, Resurrection Science: Conservation, De-Extinction and the Precarious Future of Wild Things.

10:45 The Reading: Chappy by Patricia Grace told by Jim Moriarty and Simon Leary (Part 5 of 12, RNZ)

Central banks' decisions on interest rates get ever harder, beginning with NZ's Reserve Bank this Thursday

11:30 Major project to map thousands of disused mines in NZ

It's estimated there are around 5 thousand disused historic excavations and mines around New Zealand - but we only have records for half of them.

WorkSafe New Zealand and New Zealand Petroleum & Minerals have established a joint project to track down all the current and historical mine plans in New Zealand. The aim is get better agency oversight of mine plans, to support government agencies, local government and mine operators to help make the industry safer, and reduce the risk of injury or loss of life.

Mineral Industry consultant John Taylor is an expert on historic mines and has been charged with finding as many old mine plans as possible.