09:05 How did the pilot of Germanwings flight 4U 9525 who deliberately crashed the plane, remain in his job given his mental state?

Tony de Brum is the Minister of Foreign Affairs of the Republic of the Marshall Islands on the challenges facing his nation. The Marshall Islands lie just north of the Equator and is made up from two chains of coral atolls and more than one thousand islets. The sea is rising around the republic and Foreign Minister Tony de Brum is continuously campaigning at world forums for climate change to be addressed as it threatens the existence of the Islands, with many parts barely a metre above sea level. Are densely populated small atolls sustainable?

09:50 What should be done to assess the mental health of airline pilots?

This follows revelations that Andreas Lubitz, the co-pilot of the crashed Germanwings flight was suffering from mental illness which he kept hidden from his employer.  It is believed he deliberately crashed the plane into the French alps, killing all 150 people on board.

Ilja Shulz is the president of the German Airline Pilots Association.

10:05 The impact of environmental factors on our genes

Professor Joe Nadeau is at the forefront of the study of epigenetics, investigating how environmental factors like diet, stress and conditions in the womb can alter a person's genetic make-up. He is an award winning scientist at the Pacific Northwest Institute in Seattle. His most recent breakthrough is the discovery that epigentic changes can be passed down from parent to child for several generations, but it's still unclear how or why that happens.

10:35 Book review: 'The Legend of Winstone Blackhat' by Tanya Moir

Observations and anecdotes from the life of New Zealand's pre-eminent criminal defence lawyer. (Part 5 of 8, RNZ).

Political commentators Matthew Hooton and Mike Williams on the outcome of the Northland by-election. 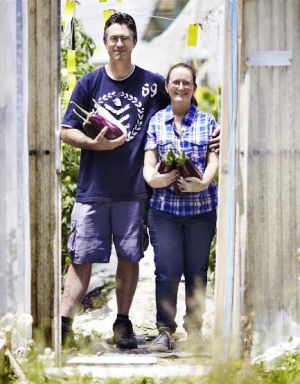 Clevedon tomato growers Anthony and Angela Tringham from Curious Croppers.If you have a glut of tomatoes at the moment, they have recipes for Gazpacho, Tomato, Ricotta and Oatcake Canapes and Caprese Salad.

The Tringhams have been selling their produce at the Clevedon Farmers Market on Auckland southern outskirts and two years ago they began supplying restaurants. The couple grows rare and unusual tomatoes.
Photo by Manja Wachsmuth.

The controversial plans to extend the Bledisloe Wharf by Ports of Auckland.