09:20 Fears for Vanuatu economy as tourists cancel trips after Cyclone

Vanuatu tourism operators say the country's economy will suffer even more as tourists cancel their trips - even to Islands unaffected by Cyclone Pam.

Paul White runs Aore Adventures Dive Guides, on the island of Aore, off Santo, which was not affected by Cyclone Pam.

09:30 How a rule change on the use of drones could increase the productivity of  farming, forestry and energy sectors

The Government is considering relaxing the rules on the use of drones, which a report says could result in a multi-million dollar boost to the farming, forestry and energy sectors. The Callaghan Innovation study on the benefits of unmanned aerial vehicles - UAVs - for use beyond line-of-sight, found they could deliver benefits of up to 190 million dollars a year including better pasture management for grazing, disease detection in plantation forests and inspection of the electricity transmission network.

The report's author is economic consultant, Andrew Shelley, who is also on the Civil Aviation Authority's working group that is trying to get the rules changed to make the most of UAVs. 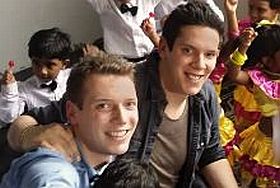 Just over ten years ago, Rob Forkan, was orphaned by the Boxing Day Tsunami. He was 17, in Sri Lanka with parents Kevin and Sandra, as well as brother Paul, who was 15, 12-year-old Mattie and 9-year-old Rosie. Kevin and Sandra died while getting the youngest siblings to safety.

Ten years on, and Rob and Paul Forkan have set up a business selling designer jandals to support fellow orphans in Sri Lanka and India. The brand is called Gandys, the jandals are sold in a range of top end retailers in the UK, and have been endorsed by Sir Richard Branson and given to royalty.

Rob Forkan speaks to Kathryn about the brothers’ desire to give back to those who helped them after they lost their parents.

Observations and anecdotes from the life of New Zealand's pre-eminent criminal defence lawyer. (Part 2 of 8, RNZ)

Reggae superstar Jimmy Cliff began his recording career at the tender age of 14, when his 1962 single, Hurricane Hattie was an instant hit in Jamaica. Cliff broke through to an international audience in 1969 with Wonderful World, Beautiful People and then solidified his place as a legend thanks to his contribution to the soundtrack of the 1972 film, The Harder They Come, in which he also starred. Over the years his recordings of songs like Many Rivers To Cross, You Can Make It If You Really Try and Sitting In Limbo have become reggae classics. Jimmy Cliff will play two shows, in Tauranga and Auckland, this weekend.

11:30 Implications of a NZ First win in Northland

Art podcasts, protecting land art, and a new exhibition at Pataka in Porirua.

Tungaru: The Kiribati project being installed at Pataka, Porirua