Up to 30 thousand Yazidi people remain trapped on Mt Sinjar in northern Iraq in searing heat and without food, water or shelter. The Yazidis fled to the mountain last week to escape the Islamist militants known as the Islamic State.

09:30 The impact of cannabis and alcohol on the teen brain

Dr Lindsay Squeglia, leading researcher on alcohol and marijuana and their effect on the adolescent brain (University of California San Diego). She is visiting New Zealand for a symposium on Alcohol, Marijuana and the Adolescent Brain, organised by the Brain Wave Trust. 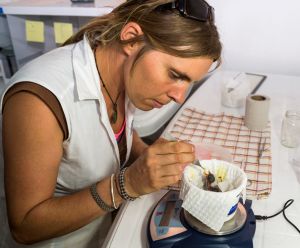 Based within the Charles Darwin Foundation, Francesca Cunninghame leads the restoration project for mangrove finches of the Galapagos islands.Lynn Freeman spoke to Francesca on her recent visit to the Galapagos Islands.

In addition to producing a wide array of other artists – Bonnie Raitt, Aaron Neville, Loudon Wainwright III, Bettye LaVette, Allen Toussaint – Joe Henry is an accomplished songwriter and singer who has been recording his own material since the 1980s. During the 1990s he honed his craft by working with the likes of T Bone Burnett, Daniel Lanois and The Jayhawks. By the 2000s he had established his own recording studio along with a group of extremely talented musicians such as Greg Leisz, Jay Bellerose and David Piltch who help him create his unique sound. As a songwriter, Joe Henry is one of the most literary around, drawing comparisons to the likes of Tom Waits and Bob Dylan. Joe Henry has just released his 13th album, 'Invisible Hour'.

British artist Jake Chapman says children are "barely human yet" and thinks parents who believe taking them to art galleries is a good idea are "arrogant", and new public sculptures for Sydney cause an uproar.