09:05 The new child-health data sharing system that is being called a game changer

The National Child Health Information Programme, or NCHIP, is being piloted in the midlands region, including Gisborne, Rotorua, Taupo Waikato and Taranaki. It links up all the data bases of health providers in the region, and keeps track of children from birth, identifying those who have missed health milestones. The chief executive of the Midlands Health Network, John Macaskill-Smith and Orion's New Zealand Manager, Jerome Faury.

The UK government has announced that a public inquiry will be held into the death of the Russian dissident Alexander Litvinenko in 2006. Mr Litvinenko, a former KGB officer who became a British citizen, died in a London hospital after he was poisoned with radioactive polonium. The investigation will examine whether the Russian state was behind his death, which Russia has always denied. Litvinenko wrote a book, Blowing up Russia: Terror from Within, with Yuri Felshtinsky, in which he claimed FSB agents had been responsible for the bombing of apartment blocks in Moscow and two other cities in 1999. The book was banned in Russia. Yuri Felshtinsky gives his response to the inquiry announcement.

10:05 80-year-old Wellington woman who started a children's home in South India 30 years ago

Eighty-year-old writer, Jean Watson is an anonymous elderly woman living in a modest Wellington flat. But in southern India she is revered as the famous 'Jean Aunty'. Thirty years ago she sold her Wellington house and used the proceeds to buy the land for a children's home in Tamil Nadu in southern India. She speaks to us, along with documentary maker, Gerard Smyth, whose film about her, Aunty and the Star People is screening at the New Zealand Film Festival. 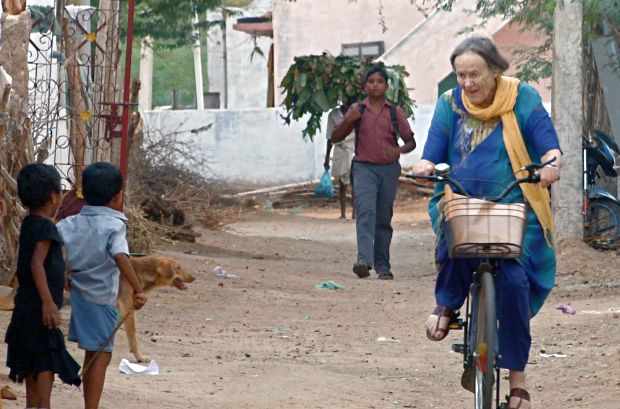 Jean on her bike in India

A  fiction which tells the story of four convicts who stowaway and then get dumped on an uninhabited Pacific Island. (Part 2 of 12)

Irma is officially “The Soul Queen Of New Orleans”. Although she’s never had a big hit, she’s been making fantastic records since 1960. Among her most well-known recording are It's Raining from 1963 and Time Is On My Side from 1964. The Rolling Stones first heard Time Is On My Side from Irma Thomas. Irma is still performing live and recording, her most recent album is 2008's Simply Grand, in which she is accompanied by pianists like Dr John who also played on her first recording.

11:30 Legal Commentator, Chris Moore on the Right to Silence

Law Society president, Chris Moore discusses the presumption of innocence and the right to silence.

Siouxsie Wiles explains why neuroscientists have generated mutant worms that don't get drunk, and the brain of the world's first known predators is discovered.