David Jacobs is the editor and publisher for the Boston Courant weekly newspaper. 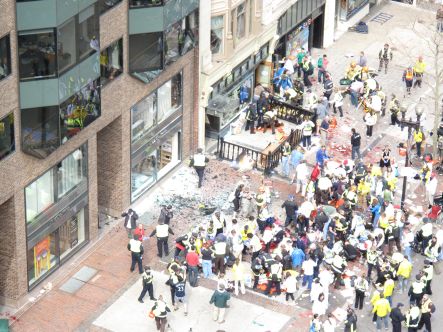 Scene of the Boston Marathon explosion. Image by Gen Tracy from the Boston Courant.

Laila Harre, former NZ MP who had just finished the Boston marathon when the explosions occurred.

09:40 How an Auckland secondary school has made dramatic improvements in the achievement rates of its Maori and Pacific students

Brian Evans, principal of Kelston Boys High School in West Auckland, which has seen a marked improvement in the NCEA pass rates for its Maori and Pacific students who make up three quarters of the school roll; Nathaniel Apa, a Year 13 student and member of the school's First XV; and Joevini Leota who is in Year 12.

Professor Callum Roberts is a marine conservation biologist at the University of York. He is the author of The Unnatural History of the Sea: The Past and Future of Humanity and Fishing. His work examines the impact of human activity on marine ecosystems, particularly coral reefs.

With Bold Needle and Thread by Rosemary McLeod
Published by Godwit

The lack of analytical advice on Mighty River Power available to investors.

Jack Dee coming to New Zealand for the first time as part of the International Comedy Festival.

Jack was the original host of the biggest comedy show on TV Live at the Apollo (formerly called Jack Dee Live at the Apollo) and the creator/star of the hit show Lead Balloon. Jack is very popular over in the UK – he's worked for the BBC, is a regular on Stephen Fry's QI and The Graham Norton Show, as well as appearing in many Comic Relief telethons and stunts.

Susan Devoy's "exclusive" interview on Maori TV, the Scoop Foundation launch and what news stories get passed on.