Rami Khouri from the Institute of Public Policy and International Affairs at the American University of Beirut.

Schools are now finding they cannot enter vital end of year data to ensure staff get their Christmas pay.

A hospital In Christchurch has opened a new wing which will offer expanded counselling, a free dental service, and free colonoscopies – and it's already oversubscribed. Philip Bagshaw is a surgeon and founder and chair of the Canterbury Charity Hospital.

Lindah Lepou is an award-winning fashion designer who coined the term, 'Pacific couture' to illustrate a distinction between Pacific 'fashion clothing' worn every day and Pacific 'fashion art'.  Lindah's designs draw equally from European couture and her Pacific heritage.

Her multimedia exhibition, Aitu: Homage to the Spirit, can be seen at City Gallery in Wellington, until December.

Back to Blood by Tom Wolfe
Published by Jonathan Cape

10:45 The Reading: The Trouble with Fire by Fiona Kidman

A series of short stories by Fiona Kidman.

11:20 Treasures from the Turnbull collection with Fiona Oliver

Two early emigration stories – one a success, the other a spectacular failure – with the missionary James Buller as the link between the two.

Gallery: Treasures from the Turnbull collection 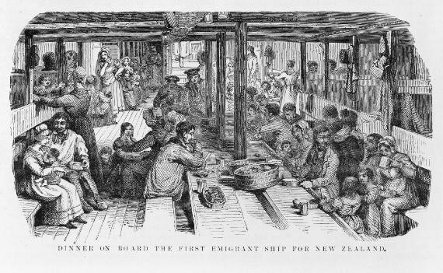 'Dinner on board the first emigrant ship for New Zealand' (Auckland: Star Lithographic Words, 1890). The Aurora was the first immigrant ship to New Zealand; however, this wood engraving was an adaptation of the scene on another ship, published in the Illustrated London News in 1844. Conditions were likely to have been very similar. ATL ref: A-109-054

New releases Skyfall, Diana Vreeland: The Eye Has To Travel, and Robot And Frank.