09:05 The head of EQC reveals that it has negotiated its reinsurance

Earthquake Commission chief executive Ian Simpson talks about the commisson's recently concluded reinsurance negotiations and addresses frustration from quake-hit Canterbury residents about the frustration that many feel about the slow process of settling claims.

Goldman Sachs NZ CEO Andrew Barclay is the convenor of the newly-launched 25 Percent Group which is targeting 25% female participation on boards by 2015.

The aftermath of the Queen's Jubilee, a parade of former prime ministers before the Leveson Inquiry and Prime Minister David Cameron leaves his daughter at a pub.

Find out more about the images below. 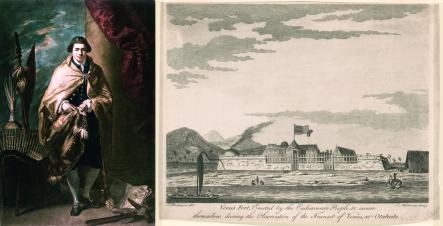 Left: Joseph Banks with South Seas souvenirs. Engraved from a portrait by Benjamin West, by J.R. Smith, 1788. From the collection of the Alexander Turnbull Library.
Right: Venus Fort, erected by the Endeavour’s people to secure themselves during the observation of the transit of Venus at Otaheite. Engraved by Samuel Middiman, from a sketch by Sydney Parkinson, 1773. © National Library of Australia.

A quirky picaresque tale, tells of real life inventor Franklin Bodmin and his collector son Will.

New apple stuff; the right to be forgotten on the Internet; and cyber security awareness week.

An Introduction to Cybersecurity

11:20 Parenting with Rachel Hansen - assumptions and experiences of gender in the preschool years

Rachel Hansen is an educator providing workshops for parents, teachers and students on body image, sexuality and gender. She has a background in education and psychology. She's also the New Zealand programme director for Enlighten Education.

Happy 80th birthday to the NZ Woman's Weekly; coverage of ACC versus Bronwyn Pullar and the role of The Dominion Post newspaper; plus Sir Bob Jones is back in print at The New Zealand Herald.