After drought, fire and flood parts of Eastern Australia are now enduring a mouse plague of biblical proportions.

“They are pouring out of sheds, you lift up a piece of machinery and they pour out in their thousands, hay bales are shaking. 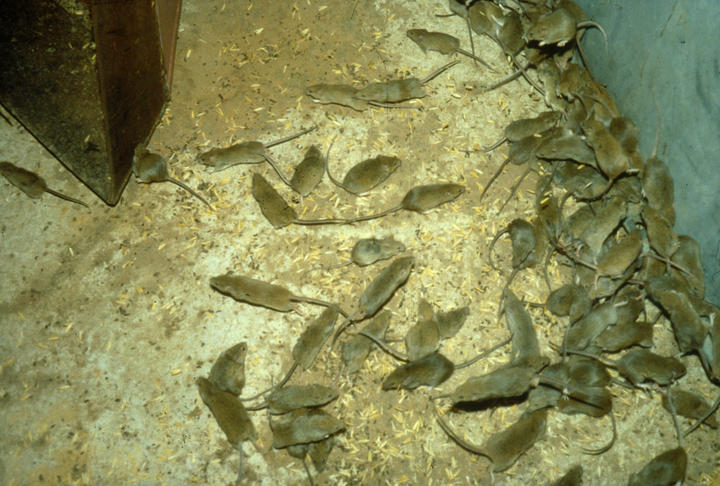 “You drive at night and put your high beams on and the road is just swimming with mice, when you drive it sounds like bubble wrap. “

People are killing a thousand a night, Thackery says, and that is “barely even touching the sides.”

Following this story for the ABC has been a particular challenge for Thackery who has a mouse phobia.

“A few years ago I had that experience where they are through your bedroom, through your bed and that is just so awful, and I’ve got this awful job now of following the story.

“I was filming in a supermarket which has so far lost $30,000 in produce from throwing that out and I was meeting to film them, and I had a little crowd watching me because they thought it was so funny me screaming and throwing the camera whenever one jumped out.”

But for businesses in NSW’s grain belt it is no laughing matter, she says.

“You walked into that supermarket and the smell I just can’t explain it, but it was just swarming with mice, running in through the food, running through the aisles.

“It’s really terrible because you’ve got people who have gone through the worst drought in history, in living memory, here in Australia and then we’ve had Covid and people are saying these mice could be the final nail in the coffin for a lot of small businesses.”

The mice are causing mass destruction; eating though wiring, eating through walls, eating phones and destroying silos of grain and hay bales.

People are even winding up in hospital with meningitis-type diseases through coming into contact with mouse urine.

The plague is the result of weather perfectly suited to mice breeding, she says. 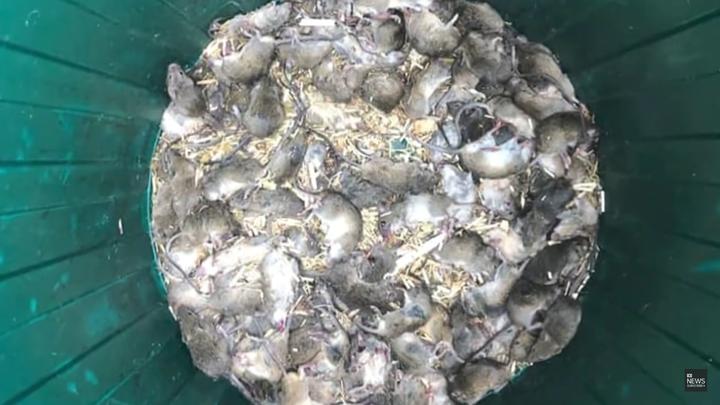 We had an awful drought where everything died, you had native animals dying there wasn’t a blade of grass to eat so that killed all the predators, and then when it started raining after the drought just one day, it was like someone flicked a switch.

“It rained beautifully, and we had this amazing season and mice are kind of like cockroaches, they say if there was an apocalypse they are just an animal that will survive and thrive.

By now they would have normally stopped breeding, she says, but they are continuing to multiply.

And a cold snap or rain probably will probably not help now, Thackery says.

“They are at the point now that they are in such big numbers, and their burrows under the ground are so well developed, that they now have really good shelter to get out from those elements.”

Starvation or illness is now the best hope, she says.

“What they are worried about is if they keep breeding, by the time you come to spring, which is when you really see them start multiplying their numbers, we’re worried about next year when we’re going to have an even bigger base to start from in terms of mouse population.”

In the preceding drought many predators such as owls and birds of prey died, she says, and people are now taking matters into their own hands out of desperation.

“People are at their wits end spending thousands of dollars on baits, poisons and traps whatever they can do to try and kill these mice, like I mentioned people are catching 1000 every single night.”

But it’s having no impact and the mice are getting bigger and stronger, she says.

There is no support for people in regional Australia being hit hard by this plague, Thackery says.

“This is costing people so much money, they are coming back from the drought, they had grain in silos and hay stored and people are losing hundreds of thousands of dollars’ worth of hay and in a lot of cases grain as well.”

The last big mouse plague was 1984, and she says people are saying this one is worse.

“This has progressed very quickly it was pretty awful to see all the mice in January, but I would say that’s just a drop in the ocean.

“People have had to put their babies’ cots in buckets of water to stop the mice running up the legs and getting in with their baby.”

People are finding all sorts of ways to mass trap the mice, but it is a losing battle, she says.