Queenstown native Steve Wilde had big plans to head across the USA in a 1978 GMC Motorhome and then on to Europe and Asia. Then Covid-19 struck and left him stuck in Palm Springs, California.

A journalist for many years, he rented his place in Queenstown, and set out to tell stories about the people he met on his travels. 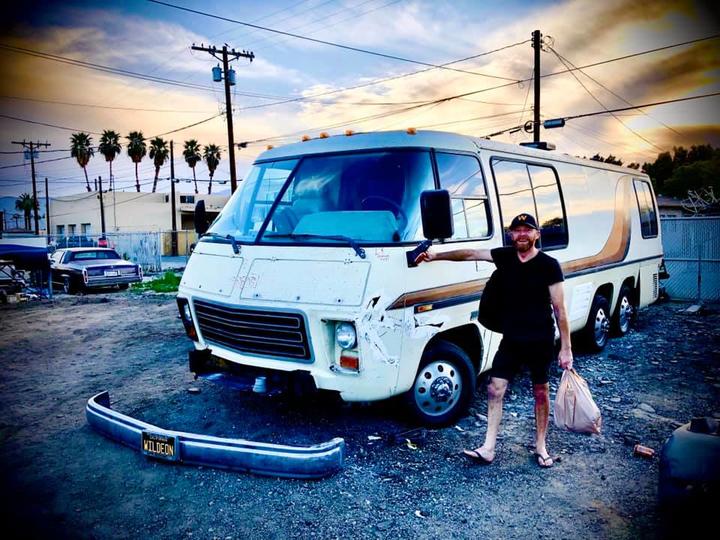 “I just got the hankering to tell these stories, I’ll go out to the world, travel around and just find real people, real trip stories and really look at humanity.”

He located his campervan in near Los Angeles and has spent the last year doing it up and preparing for the journey.

But he told Bryan Crump, he didn’t get very far on that journey.

“Literally on the first 100 miles, down the road from LA and the corona virus sort of came in. Really? Is this as far as it goes?”

He’s riding out the lockdown at a friend’s house in Palm Springs.

“Palm Springs is probably a bit like Queenstown. It’s a resort, a winter warm resort. It’s got a demographic shall we say that’s not the real world.

“California is not really the US as well, it’s so liberal, it’s not like the rest of the country, so you kind of get a skewed view on the whole thing.”

When Covid-19 first hit people in California  they didn’t take it seriously.

"There were edicts from the Governor, bars were closed and they just kind of ignored it for a while, it took a while for people to go oh this is a serious thing.

“They just thought we’re Americans and we just don’t stop.”

He hopes to be on the move again in the next few weeks, but has fears about the spread of Covid in the US.

“I think parts of the country could dramatically go back into lockdown because it rebounds, I don’t feel confident here that they are on to it.”

His original plan is up in the air, he says.

“Will there be a journey after this? The original plan was to drive the motor home all the way to Asia from California, ship it across to Europe then keep going, so that may have to fall by the wayside, because I don’t know what the world’s going to look like in six months, a years’ time.”

Steve says he plans to at least get to the East Coast and weight up his options from there.

“The other thing is I don’t really want to have the virus in the states, it’s kind of an expensive journey to go to hospital here.”

His source of income from his Queenstown property has also dried up, he says.

“I made my Queenstown house into an Air BnB - so that has obviously completely collapsed.”

The situation in Queenstown is a “a catastrophe” he says.

“There’s a bit of a chip on the shoulder about Queenstown and people think everyone’s rich there and living it up … they’re not.

“The service industry, 5000 workers … gone. Can you tell me of anywhere else in New Zealand where an industry closes down and 5000 people lost their jobs whether there wouldn’t be a huge outpouring from the nation?”

Steve says the pandemic has shaken the US, and the nation is going through a crisis of confidence.

“I’ve been coming to the states for well over 30 years, this country is in a crisis, it’s a confidence crisis because you talk to them and they realise the whole world is laughing at them, and especially about their political situation.

“The political situation seems broken to me on both sides. They are still looking to that system to try and solve their issues but it’s not working.”