Sara Harvey is the Agony Autie.

The 31-year-old from Chester in northern England offers wisdom and comfort and some frank talk to autistic and non-autistic people alike on her video channel. 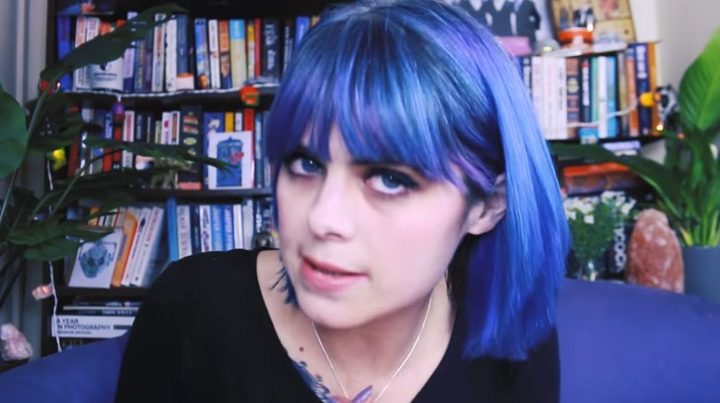 She started Agony Autie 19 months ago and says the reaction to it has been "just insane."

Sara is herself autistic, but didn't realise until she was an adult and had a child of her own.

"My son taught me I was autistic. I didn't know I was autistic until I was 26. I'm 31 now and oh my God what an answer, what a revelation - all my life, all my life, since I was like seven I knew there was something very different about me. Why? Because you all kept telling me!

"I was weird, I was strange, there was something about me. I was hyperactive, attention seeking. Actually, I was this autistic child in the '90s and the '80s not being recognised so when I recognised it in my son I thought thank God, thank God I know."

Agony Autie is about giving one autistic person's perspective.

"I want to reach people who want to know what autism is outside of a medicalised and textbook framework. They can come to me and as an actual autistic person and see what it's like from one perspective."

Sara says no one autistic person presents like another, but there are commonalities. Autistic people have different sensory processing systems to "neuro-normals", she says and this means they can be overwhelmed.

In her own case she perceives light in a unique way, which can be emotionally exhausting.

"I can hear the lights ringing and buzzing, even when I'm away from the room I can still hear them. Autistics will also have visual dots and statics and they can't look at your face because they have these flashing lights - it's visually distressing and emotionally distressing."

Sara says she can see things such as auras.

"I can see static fuzz, what we would see say, on a VHS video. I see a wide spectrum of light, my squishy, flashy brain can see exactly what a camera can see. I can see chromatic aberration, which people describe as auras.

Sara's son is also autistic and she feels a mixture of relief she understands him, and fear for how he will navigate a neuro-normal world.

"I was scared for my son, not because he was autistic but because of the stigma and the vulnerability that being autistic would bring to him for the rest of his life."

She has been overwhelmed to the reaction to her videos which have been views by thousands.

"All of a sudden I get this collective viewership saying 'hey, what you're saying here has value'.

"Only by understanding my autistic neurology, realising that I'm not broken, not a deficit, not to blame, not abnormal, not weird, not freaky, all the things I digested, all the things that almost took my life in the past."

Sara explains that what appears as odd behaviour by autistics to the neurologically normal is a form of self-soothing.

"Stimming" she says is behaviour autistics use to emotionally regulate.

"We self-regulate by moving. Emotions are tangible, I can feel them in my heart, my chest. I can't feel emotional without a physical response so I have to move and that's always made sense to me.

We all "stim" she says. We foot tap, tap fingers, hum and head-scratch.

"Stimming is human, it's not just for autistics, we just do it a God damn lot - we're famous for it.

Sara came to terms with who she was once she had a framework within which to understand herself, she says.

"I did see myself as broken, I believed I would die by the age of 27 because I thought how on earth can I live in this world when I don't understand my behaviours?

"I didn't understand myself. I thought I was crazy, mentally ill (whatever that is) and then I learnt I was autistic and I thought oh God they were right all along. I was the broken thing.

"And then I realised through my son I don't think he's broken, so why the hell do I think I am?"

Now she has an identity, she sees autistic culture all around.

"Autistic culture is everywhere, the difficulty is we don't have a claim to it."

And what would she say to others struggling with autism?

"Stop for one second thinking that you're so broken, so abnormal that you don't have a place in this world, that you don't belong because it's not true. That's a lie, you definitely do.