There are stories passed down through generations that give us an eye into our personal history and identity; stories of rebels...and survivors who pave the way for us.

Conversations with Dead Relatives is a tale of family histories written and performed by Phil Ormsby and Alex Ellis, who delve deep into the stories of their ancestors. 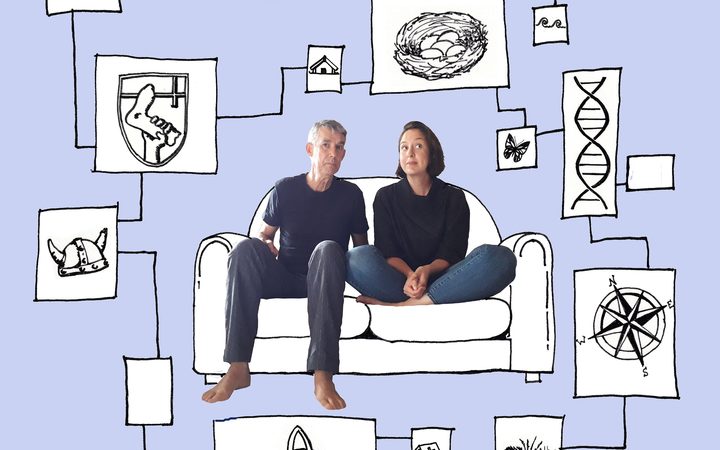 Director Jennifer Ward-Lealand says the play connects an audience through a search for identity - a trend that has become popularised through TV shows like, Who Do You Think You Are?

"I think it's quite a primal thing to know who your tribe is or where you're from, [but] science has made everything so much more readily available," she says of a broad-reaching interest in genealogy.

Between the two actors, the play includes a wealth of characters. One is Ellis' ancestor who wrote a book in 1882, entitled Everything is possible to will. Ellis describes it as a thinly disguised biography about a woman whose relationship with her husband didn't quite live up to her hopes and dreams. A copy of the book ended up in Queen Victoria's library and is the first book held in her collection that is written by a woman.

For Ellis, exploring her family history was partly about juggling characters and finding out which ancestor should have a voice in the show.

"You feel a lot of guilt if you leave one of your ancestors out," she says.

But good storytelling comes first and according to Ellis, creating the show has been a process of finding a good mix of drama, romance, excitement and pathos.

Ellis and Ormsby workshopped the first season of Conversations with Dead Relatives in Melbourne at La Mama Theatre as part of a programme for new work, and Ellis says one of the key learnings from showing at La Mama was a sense of familiarity that people drew between the characters and their own personal family stories.

But delving into history often reveals dark stories of hardship and loss. Ward-Lealand says there are at least seven relatives who make their presence felt, and she points to 'Ellen' as an interesting character who lost one of her son's overboard on the way over to New Zealand.

But later, tragedy struck again when Ellen decided to return to England with her New Zealand-born children, with her intention to take them back to learn the classics.

"A storm hit them in the Pacific," says Ward-Lealand. "Their boat was turned right on its side, and her boys slid off into the drink. When the boat was righted she lost her other son. She went from having three sons to having one."

For Ellis, exploring her family stories and histories has brought up a lot of questions about how family history is passed down.

Conversations with Dead Relatives tells of mighty warriors, princesses, ratbags, preachers and visionaries and runs from 3-7 April at The Basement Theatre in Auckland.