Mickey Mouse is more recognisable than Santa Claus and is estimated to be worth more than $US6 billion in profits a year – and he’s a character Disney is fiercely keen to keep control of.

Journalist Zachary Crockett is a writer for Priceonomics and has been following Disney’s legal efforts to make sure it retains copyright over its most famous creation.

He told RNZ’s Bryan Crump, Mickey is the face of Disney and is synonymous with its brand.

That’s particularly impressive when you consider Mickey’s simplicity, he’s often represented as a symbol made up of just three circles but is instantly recognisable. 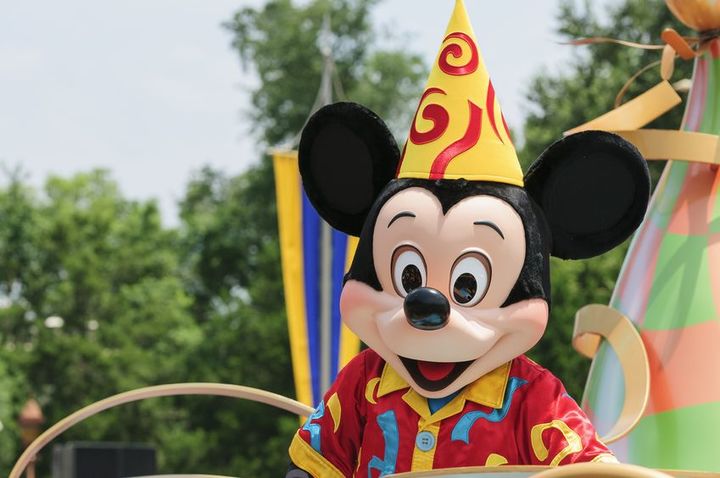 Mickey Mouse during a parade at Disneyland. Photo: 123rf

Crockett says Disney is well aware of Mickey’s power and for years the company has not only lobbied to extend copyrights on Mickey, but it has engaged in fierce battles with anyone who attempts to replicate him.

Having been created in 1928, Mickey Mouse fell under the 1909 Copyright Act, meaning it should have had 56 years of protection and expired in 1984.

“So in the early 80s, by then Mickey was worth billions and billions of dollars in annual revenue, and more importantly he was the face of the company – losing him would be a massive blow to Disney.

“So they began lobbying really hard in DC. And if you look at the Copyright Acts after 1909, they seem to fall in line with the dates that Mickey was due to expire.”

He says in 1976, just eight years before Mickey was due to expire, Congress completely reformed the Copyright Act and expanded the copyright term from 56 to 76 years.

Then again in the late 90s, Disney lobbied again and copyright was extended to 2023.

“I looked into the lobbying records in Washington… and if you look at these records the correlation of Disney donating to congress members and these Copyright Acts being extended is pretty remarkable.”

Crockett says before the 2023 Copyright expiration, Disney is spending around $US3 million a year on lobbying, with a portion of that likely aimed at changing copyright legislation.

“It seems like they haven’t started their huge push to start doing that yet, traditionally that starts around 7 to 8 years before it’s due to expire.”

People in favour of the lengthy copyrights argue they incentivise people to create new things, he says.

“They also keep money in the company to produce new things for the greater good.

“Children across the world benefit from the films that Disney is able to make from the revenue they generate through these copyrights.”

But he says copyright experts he’s spoken to argue that very little money from the copyright revenue is used for creating new characters.

“What’s really going on here is that a giant corporation, that is too big to fail, that has a tremendous power behind it, is in my opinion, unfairly using their size and their power to influence legislation, and that’s a very dangerous thing when you have private interests having a say in the law.

“Not in Mickey Mouse’s case of course – we all have access to Mickey Mouse – but on a more granular level, the policies that Disney is impacting do not make works more widely accessible.”

But Crockett notes that even if Mickey’s copyright were to expire, Disney has 19 trademarks – which protect the words, the phrases, symbols, anything used to identify the source of a product.

“Mickey is so embedded in Disney’s corporate identity that Mickey is essentially awarded protection for eternity.

“It’s kind of a sad truth for truth for crusaders of the public domain – the more powerful and the more recognisable a piece of corporate property is, the less likely it is to be relinquished.”

Crockett says there’s some signs of hypocrisy around Disney’s copyright action, as the company has made $25 billion off films which they wouldn’t have had the rights to if they hadn’t been in the public domain.

That includes movies such as Aladdin, Beauty and the Beast, Cinderella, Mulan, and The Little Mermaid.