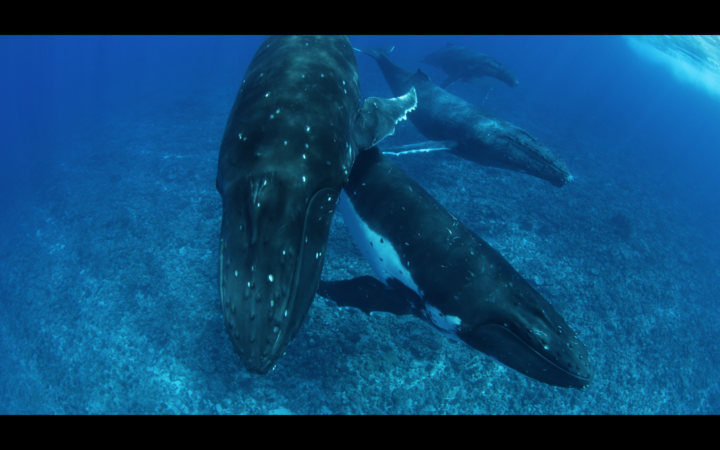 Humpback whales swim in remarkably straight lines while completing their seasonal migrations, which cover thousands of kilometres of open ocean.

Geologist Associate Professor Travis Horton has been tracking their journeys to get a better understanding of how the mammals navigate.

He'll be speaking at TEDx Christchurch on Saturday 29 October.

Where did your interest in whales come from?

Coming to whales for me was out of the blue in 2007 when I moved to New Zealand from the U.S. with my family. A colleague of mine showed me an article that he was working on about migratory sea birds and I thought, ‘Wow, that is really cool’, and I just wondered if another animal might be doing a similar thing.

I just thought of a spectacular, awe-inspiring migrations and the first thing that would pop into most people’s heads would be the long migrations of the humpback whale. I just happened to get on the internet and that brought me to Nan Hauser, who is the president and director of Cook Islands’ Whale Research and she at the time was satellite tracking humpback whales out of Rarotonga and every day the tracks would get updated and I was just following along and doing a bit of geological analysis along the way and recognising that yep, okay, there seems to be a similar pattern here between what my friend was seeing in the birds and what I was seeing in Nan’s whales as they were being updated daily on the internet.

So I came to whales in a round about way and it certainly wasn’t planned. It was a research opportunity that fell in my lap and it has been nine years of amazing, awe-inspiring science ever since.

What do you mean by geological analysis as you are tracking the whales?

The classical thinking around how animals navigate is largely centred around magnetic orientation and there are certainly other ideas and theories out there, and the short answer to how animals navigate is we still don’t know. Magnetic orientation is one of the leading theories. So as geologists, we know that rocks and part-magnetic anomalies on Earth’s magnetic field and there are multiple ways that you can model Earth’s magnetic field. You can use a simple dipole, which is what most of the animal orientation community would use. You could use a more sophisticated geological or geophysical modelling that brings in the rock anomalies.

When you say dipole, you mean north versus south?

Exactly. “Di” meaning two, so a north and south magnetic pole, which turns out to be opposite from our geographic north and south poles. The magnetic field is temporally dynamic as well. So it is spatially dynamic, it depends both on where you are on the main field, but it also depends on where you are on what we call the rock anomaly field. That main field changes with time and it even changes on a daily basis as the solar wind interacts with the magnetosphere.

Can you explain the phrase rock anomaly field?

So thinking about a seamount or an island or a place like Banks Peninsula here, another old extinct volcano, those were all due to their geology, their minerals, their chemistry, they’ll impart magnetic conditions locally that if an animal were using magnetic information to navigate by those local anomalies could change their movement behaviour in their navigational system.

Yeah, exactly. This is one of the places where when you do get into this level of detail and you start playing with these geological models, the classical thinking starts to unwind a little bit and it’s not necessarily wrong - the better way to think about it is incomplete.

Many experiments have been done on animals in laboratory conditions and they show quite convincingly that many animals including migratory species have a magnetic sense, but when you take those ideas and look at actual animal movements in the wild, it’s hard to get the conventional thinking to agree with what we see the animals doing. So local anomalies could confuse them. It certainly could have any number of different effects including getting lost, but every way I would think about it is perhaps our thinking has only been about half of the situation or half of the navigational process.