life and society refugees and migrants
5 May 2016 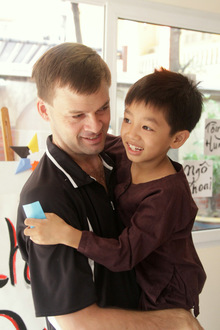 Australian teacher Michael Brosowski has rescued 525 trafficked children, sent 4,046 kids back to school (and played over 2,000 games of soccer) with Blue Dragon – his foundation for Vietnamese children in poverty.

Paul Brennan: Where did the name Blue Dragon come from?

Michael Brosowski: When you look up at the sky in Vietnam you don’t see a whole lot of blue. And the sort of work that we deal with is also a bit like looking at grey.

PB: How did this get started?

MB: It came about very, very simply from me being in Hanoi. I was teaching in the economics university. After work I would see children shining shoes on the street. They were kids from the countryside that had come in to earn money for their families. And I had a skill – teaching English – that they wanted. So just very naturally, very simply, I started teaching there on the side of the street. Some of my university students – who are young Vietnamese adults – found out about this and they wanted to get involved. They could see this is a worthwhile thing to do. Let’s help these kids with some education. And it all grew from that.

PB: Is something you got turned on to seeing it in real life?

MB: At that point in my life I hadn’t really put into words what my philosophy is. I guess I was still exploring it. But I grew up in poverty. I grew up living in caravans on a block of land. We raised goats for their milk and their meat and we grew our own vegetables. And later on I went on to become a school teacher. School teachers don’t earn millions, but you can live a comfortable life. And I was living that comfortable life as a school teacher and felt deeply unsatisfied… It didn’t make me happy. I was no happier than when I’d been very poor. So the first time I left Australia on a holiday I went to Vietnam and I felt real joy. I just felt a connection with the people.

I was on a tour bus. And it was one of these big tours – dozens and dozens of backpackers like me. We were in the south-west of the country and there was a mountain we were going to walk up… I’d had some food poisoning so I said 'no thank you' to the walk up the mountain. I sat at the bottom under a tree. Just sitting there local kids were coming up to me. And they weren’t asking me for money. Some asked me if I had a pen that they could have. What they wanted was help to study for their exam – they had an English exam that afternoon.

The kids just wanted to learn. And a crowd gathered and I was teaching English to these very, very poor children. And while I was doing that their mothers were coming just bringing me candies and Coca-Colas. One of their mothers had a shop. And she was illiterate this particular woman, she lived under a tin roof on a dirt floor. And here I was teaching her son English and she appreciated that so much. She just wanted to give me what very little she had. And that profoundly moved me.