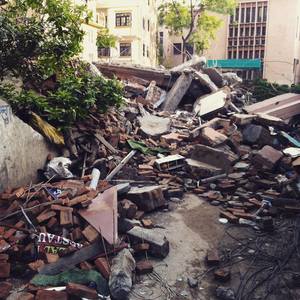 Outside Andre Budd's hotel in Kathmandu, this was an apartment building with people inside when the quake hit on 25 April 2015 Photo: Andre Budd

7:12 Our Own Odysseys - Kathmandu Catastrophe
Wellington photographer and keen mountaineer Andre Budd was on a climbing tour in the Himalayans when the earthquake struck Nepal last April...

8:43 Nights' Pundit - Kai-A-Miro
'eating the berry' with Shannon Haunui-Thompson from Radio New Zealand's Te Manu Korihi team; from the proverb 'Ko te Manu kai Ana I te Miro nona te Ao' (the Bird that eats the Berry owns the World), encapsulating the idea of a seed when eaten gives insight to the one who consumes it... a Hawke's Bay whanau that had 65 of its taonga stolen while they were supposedly safe in a bank vault held by the Crown, wants answers...

9:07 Tuesday Feature - Exchanges at the Frontier: The Search for Hunger Genes

11:07 At the Eleventh Hour - Global Village
music from a myriad of cultures